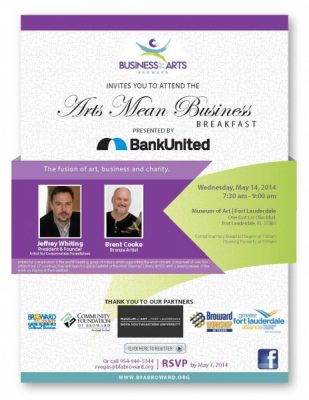 Artists for Conservation is the world’s leading group of nature artists supporting the environment. They will launch a special exhibit at the Alvin Sherman Library at NSU with a sneak preview of the work on display at the breakfast. Complimentary Breakfast begins at 7:30am, Opening Remarks at 8:00am

Founded in 1997, AFC is based in Vancouver, Canada, a non-profit organization comprises a membership of 500 of the world's most gifted nature artists from 27 countries,

Artists for Conservation is the world’s leading group of nature artists supporting the environment. They will launch a special exhibit at the Alvin Sherman Library at NSU with a sneak preview of the work on display at the breakfast. Complimentary Breakfast begins at 7:30am, Opening Remarks at 8:00am

Founded in 1997, AFC is based in Vancouver, Canada, a non-profit organization comprises a membership of 500 of the world's most gifted nature artists from 27 countries, across five continents. Its mission is to support wildlife and habitat conservation and environmental education through art that celebrates nature.

AFC's annual marquee event, which takes place each fall – is the world's top conservation-themed art experience, featuring all original artwork by painters, sculptors and illustrators. Together with the art, conservation-focused films, publications and informative presentations, the exhibit serves as a visually stunning and effective vehicle for conveying the importance of fostering creativity in art and protecting our wildlife and precious landscapes.

With the support of the BBX Capital Foundation, Nova Southeastern University and the Guy Harvey Foundation, AFC is bringing its world-class festival  to Fort Lauderdale on May 17- June 16. The new pilot event, will feature AFC's annual tour plus a selection of artwork by artists from AFC's Marine Explorer's Program. The inaugural event, hosted at the Alvin Sherman Library Gallery at NSU will feature a sampling of AFC's art and environmental education programming for youth and adults, lectures and films.

JEFFREY WHITING BIO
Jeff Whiting is the President and founder of the Artists for Conservation Foundation (AFC) – the world's leading artist group supporting the environment. With a background in biology and geology, and a penchant for owls, loons, and prehistoric dragonflies, Jeff is an award-winning sculptor, author, social entrepreneur and environmental advocate. At 16, the Canadian Prime Minister presented one of Jeff's sculptures to Prince Philip, Duke of Edinburgh. At 18, Jeff completed his first book and won first prize at the World Championships for Wildfowl Carving.

A Signature Member of the Society of Animal Artists and Leigh Yawkey "Birds-in-Art" exhibitor, Jeff serves on the Circle of Advisors for the Art-Nature-Science Foundation at Stanford University and was on Royal Roads University Foundation’s Development Committee for the Robert Bateman Centre for Art and Environmental Education.

Jeff’s personal mission is to use his expertise and background in art, technology science to bridge the international art and conservation communities in support of biodiversity, sustainability and environmental education.

In 2010, Jeff was inducted as a Fellow into the Explorer's Club and was a recipient of Business in Vancouver’s 2010 Forty under 40 Awards. Jeff is co-producing a series of art and conservation focused documentary films. The first was based on a 2010 Flag Expedition to the Congo to study mountain gorillas and locate the grave of a famous explorer. He also spearheads the Artists for Conservation Festival – an annual 10-day international art and environmental education event – and . in 2013 – the first annual BC Conservation Symposium.

Brent's love of nature is the inspiration in all of his artwork. Brent strives for anatomical accuracy and detail with each sculpture undertaken. It is important to him that each work conveys a story or engages the viewer by eliciting memories of their own in the subjects depicted. He has been influenced by the Art Noveau/Art Deco period of design and often those elements appear in is own designs. He believes that a sculpture has been successful when the viewer is compelled to touch or move the piece around for a different angle of appreciation. As the bronze medium is so heavy, he is always trying to find ways to give his pieces movement, speed, or a lightness through the use of empty space.

Brent worked as the Director of Exhibitions for the Royal British Columbia Museum in Victoria B.C. Canada for 33 years. He is now a museum consultant bronze artist and Executive Director of the Deeley Motorcycle Museum in Burnaby BC.