Presented by The Projects/FATVillage at The Projects Contemporary Art Space , Fort Lauderdale FL 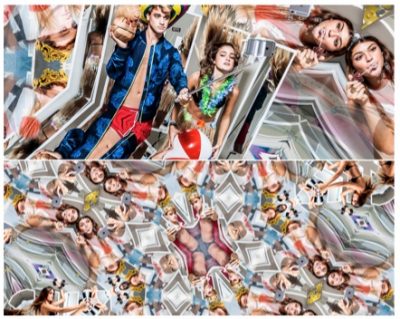 The curatorial theme for Possessed is inspired by the rampant trend of “selfies” by viewers at art exhibitions. Is this behavior simply a way to relate to or be enthusiastic about the artwork, or are contemporary viewers unable to appreciate the original object without inserting themselves into the work?  In this exhibit, the viewer is unwittingly provoked into becoming the performer.

The curatorial theme for Possessed is inspired by the rampant trend of “selfies” by viewers at art exhibitions. Is this behavior simply a way to relate to or be enthusiastic about the artwork, or are contemporary viewers unable to appreciate the original object without inserting themselves into the work?  In this exhibit, the viewer is unwittingly provoked into becoming the performer.

The curator, Lisa Rockford, invited artists that create striking, colorful, provocative, 3-dimensional artworks, to creatively respond to the narcissism of the viewer. Artists were asked to consider how they would create an installation that will entice viewers to “Strike a pose” next to their work; either honoring, or critiquing this selfie trend.

Several works will be created specifically for the exhibition, or modified to thoughtfully include a place for the viewer. For example, artists may decide to create something that will surround the viewer, mirror them, ask for interaction, or act as a backdrop. Each installation will have an “X” where the viewer is to stand, a photo with a “suggested pose,” and specific #Hashtags to use when posting online (i.e. #SelfiePossessed #Fatvillage). The curator will be offering prizes for the best selfies using these hash tags. This interactive format will allow the viewer to use their narcissism to promote the artist and the exhibit in social media.

Several of the interactive works will even have costume elements to try on, or props to pose with. In the MINK HOLE installation by Joseph Herring (image 1), viewers will put on costumes, draw on the walls of the installation and on old comics, and photo/video themselves while doing so. Joseph says “MINK HOLE is a collaborative multimedia science fiction Gesamtkunstwerk based around the present day unearthing of a tunneling system used by highly-evolved/genetically-enhanced weasels from the future to retrieve and transform the detritus of human culture into one of their own making.

To enter the space, viewers will be required to disguise themselves as weasels for their own safety, and they should assist in the magazine and comic book transformations so as not to be identified as either intruders or impostors.

The tunneling system presented will exist simultaneously in the exhibition space and the post-human future, leading right into NERZBAUHAUS, a weasel magazine design & publishing house where old human magazines and comic books are altered to better represent weasel identity. “

A more introspective installation by Gabrielle Wood entitled, Big Insecurities, also involves costumes, but may hit a more serious note; asking viewers to try on body parts that reflect the little insecurities that most people have (image 2 is an example from her previous series “Try me on”). Assorted oversized body parts made of plaster molds, and covered in beige stretchy material reminiscent of female undergarments will be hanging on the wall for viewers to choose and wear. The body parts will range from breasts, bellies, feet, necks, arms, thighs, ears, noses, etc. and the viewer can select a body part that they feel insecure about, try it on, and pose in the mirror.

According to Gabrielle, “The physical and mental insecurities both big and small haunt some people, especially when posting images of themselves online or in a text. I have selected little insecurities and made them big for the viewer to try on and photograph  themselves. The act of acknowledging your insecurities may help people realize how silly or serious this issue is. It will be both humorous and disturbing to some to realize the psychological misrepresentations they have of themselves.”