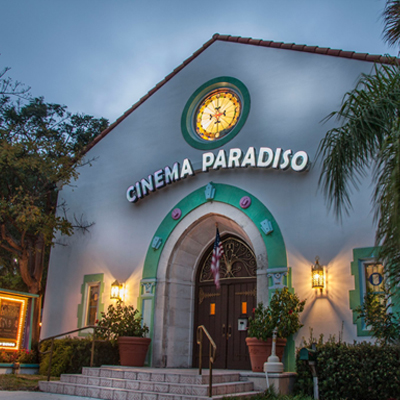 Cinema Paradiso in Hollywood and Savor Cinema in Fort Lauderdale are now open to the public at 30 percent  capacity. Masks are required to attend a movie; guests are provided complimentary masks upon request. Temperatures are taken at the door and hand sanitizing stations are positioned throughout the lobby. FLIFF is also offering 20 percent off their membership fee. Guests who sign up for a membership will be provided a 50 percent  discount on FLIFF Drive-in movies, $1 off popcorn, and up to 45 percent  off film tickets year-round.

Savor Cinema is a charming 220 – 250 seat arthouse theater located in the heart of downtown Fort Lauderdale, just around the corner from Las Olas Blvd.  Savor Cinema offers plush, stadium seating, state-of-the art sound and projection, a full bar, concessions and the John Mager Courtyard, which is perfect for gathering with friends before or after a movie.

Programmed and operated by the Broward County Film Society (the same organization that brings you the annual Fort Lauderdale International Film Festival), Savor Cinema presents American Indie and international films seven days a week with mini film festivals and events throughout the year.  The theater is also available to rent for weddings, personal and corporate meetings and parties.

Savor Cinema has quite a history.  Dating back to the earlier half of the century, the building was constructed as the First Methodist Church of Fort Lauderdale. Once the church moved to a bigger location, the building went under the charge of the County, where it’s functions reportedly ranged from a family-counseling center to narcotics storage for the courthouse. In the mid-1980’s the building was retrofitted as a stage theater for use by the actress, director, and playwright Vinnette Carroll, the first African-American woman to direct a Broadway show, and became the Vinnette Carroll Theater.

In the late-1990’s, after Ms. Carroll fell ill and activity in the theater declined, the County handed management of the building over to the Broward County Film Society. A second renovation commenced, this time to fit the existing theater with film projection equipment. Around 2000, the movie theater opened as the Festival Arts Cinema, primarily used for the Fort Lauderdale International Film Festival. Eventually it was renamed Cinema Paradiso, in homage to the Oscar-winning film that featured a church turned movie house, the theater opened as a year-round art house cinema.