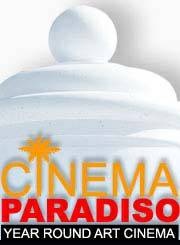 Cinema Paradiso in Hollywood is now open to the public at 30 percent  capacity. Masks are required to attend a movie; guests are provided complimentary masks upon request. Temperatures are taken at the door and hand sanitizing stations are positioned throughout the lobby. FLIFF is also offering 20 percent off their membership fee. Guests who sign up for a membership will be provided a 50 percent  discount on FLIFF Drive-in movies, $1 off popcorn, and up to 45 percent  off film tickets year-round.

Located in the heart of downtown’s Live Music District at 2008 Hollywood Blvd., Cinema Paradiso-Hollywood is anticipated to open in September of 2013. Surrounded by fine restaurants it will be the perfect night-out for dinner and a movie.

The art-house cinema will be the first theater in Downtown Hollywood for decades. Broward-based architect Joseph Kaller, will transform the store-front, once a pottery store, into an intimate 72 seat theater replete with wheelchair access and a full bar. Though enhanced by state-of-the-art digital projection, sound and a digital marquee, Kaller’s vision respects the property’s “Old Hollywood” charm with a Deco Moderne line and decorative façade.