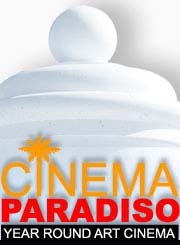 Cinema Paradiso is South Florida’s most unique theater. Operated by the Broward County Film Society and home of the annual Fort Lauderdale International Film Festival, the theater offers something for everyone.

The heart and soul of Cinema Paradiso is its role as Broward County’s only full time Art House theater, showcasing the finest in Independent and Foreign films, along with Documentaries and classic films not shown anywhere else on the big screen. But, this programming only touches the surface of what the theater provides to the community.

Because of its diversity, Cinema Paradiso has programs assessable to everyone in our community. FREE children’s films and Senior Matinees are scheduled monthly or by request. Students and young adults are introduced to the theater through Anime, Xtreme Sports, Surfing, and specialty late night programming. In turn, they get exposed to the art of film, and the culture provided by the Broward County Film Society.