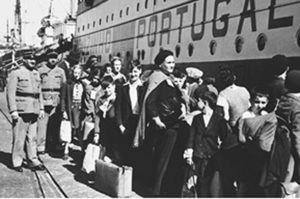 Presented by Holocaust Documentation and Education Center at Online/Virtual Space

The Holocaust Documentation & Education Center, Inc. is delighted to share the following program series from the United States Holocaust Memorial Museum, about the fate of the SS St. Louis: The ship that on May 13, 1939, fled Germany with 937 mostly Jewish passengers seeking refuge.

Just over 83 years ago this week, the MS St. Louis and most of its 937 passengers, who were largely Jewish refugees desperate to flee from Nazi persecution, were forced to return to Europe after being denied entry into Cuba, the United States, and Canada. More than a quarter of the ship’s passengers were later killed in the Holocaust. As World Refugee Day approaches on June 20, learn more about the St. Louis and how it came to symbolize the plight of refugees fleeing mass atrocities and genocide.