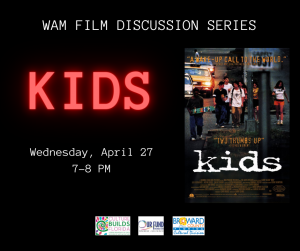 Join us for a discussion about the film KIDS.

Join us for our April Film Discussion Series featuring short clips of the film KIDS. Directed by Larry Clark, the film is a disturbing day in the life of a group of teens as they travel around New York City skating, drinking, smoking and deflowering virgins. Several clips will be played and followed by an audience discussion on the ideas and implications of the scenes and the film’s impact. Audience members do not need to have seen the film beforehand to participate in the discussion. This event will be available both in-person and online via Facebook and Zoom.