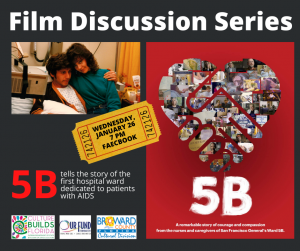 Join us for a discussion about the documentary 5B.

Join us for our January Film Discussion Series featuring short clips of the documentary 5B. The documentary takes place in the heart of the HIV/AIDS crisis and widespread hysteria. 5B is a ward on the fifth floor of San Francisco General Hospital, the first in the country designed specifically to deal with AIDS patients. Several clips will be played and followed by an audience discussion on the ideas and implications of the scenes and the film’s impact. Audience members do not need to have seen the film beforehand to participate in the discussion. This event will be available both in-person and online via Facebook and Zoom.