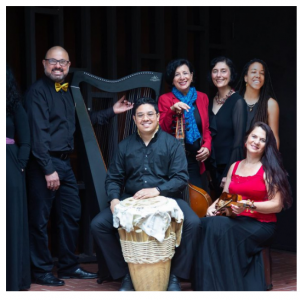 Presented by FIU School of Music at The Wertheim Concert Hall

In celebration of Hispanic Heritage, we will illustrate the intersection of early European music with the aural African and Amerindian traditions and the resulting link with current Latin-American genres, the African diaspora in Latin America and its

Using musical texts from the 17th and 18th century such us the Trujillo Codex and guitar treatises by Santiago de Murcia and Gaspar Sanz, we present the European, Amerindian, and African traditions that have survived in scores, recreating them through current performance practices of Afro-Latin music traditions in Bolivia, Peru, Mexico, Puerto Rico, and Venezuela. We tap into our collective musical memory to blend past and present, connecting current Afro-Latin dances such as the Hatajo de Negritos, Joropo, Saya, and Plena with African-influenced dances such as the Cumbe, early Zarabanda, and Zarambeque in performances informed by both history and folklore.

Also in the program: Early vocal music from Spain and Mexico, with texts from the Iberian Cancioneros that depict black women in endearing terms and connected Latin American dances and instrumental improvisations.

RUMBARROCO'S MISSION
To unite diverse communities by highlighting the fusion and confluence of the cultures of Europe, Africa, and the Americas through musical performances and educational outreach.

We show the European influence on Afro-American and indigenous music in Latin America, as well as how the fusion of those types of music with European classical music produced new musical genres. We recreate, preserve, and popularize the diverse multicultural aspects of the rhythmic patterns that have been passed down from the Middle Ages to today. And for this purpose we have formed a Latin-Baroque Fusion ensemble of musicians using period, folk, and contemporary popular instruments. Rumbarroco also aims to promote awareness and enjoyment of the musical and cultural similarities and distinctions between Orient and Occident, and among Jews, Christians, and Muslims, as experienced through Latin-American music. We seek to unite today’s diverse communities through the powerful transformative passion of the music we play. Finally, we employ music as a tool for cultural integration, especially for the empowerment of youth in their personal growth.