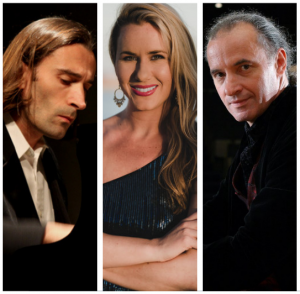 For one night only! Treat yourself to an evening of piano fireworks by Chopin and Liszt performed by internationally renowned FIU Artist in Residence and Professor Kemal Gekic, FIU alumnus Silvije Vidovic, and America’s rising star Lyndsay Garritson

Kemal Gekic | Flamboyant, daring, provocative, exciting, seductive and sensitive are some of the words used to describe one of today’s most formidable pianists, Kemal Gekic, whose playing has been acclaimed worldwide by public and critics alike. For one night only this season, he will perform a powerful evening of piano masterworks by Franz Liszt in the Wertheim Concert Hall.

His daring approach to tone and form, marked him as a maverick in the musical world, a distinction he welcomes: the very strength of his artistry challenges, provokes, intrigues. Performing worldwide from a vast repertoire, Kemal Gekic presents fascinating, uncompromising and ever-changing interpretations , always generating frenzied audience enthusiasm.

Since 1999 he has been Artist in Residence at the Florida International University School of Music in Miami, Florida.

Lindsay is a passionate advocate for new music, and her Carnegie Hall solo recital debut in November 2019 featured the world premiere of Carl Vine's Piano Sonata No. 4, a work written for her. Additionally, her second solo album titled "Aphorisms: Piano Music of Carl Vine" was just released. She has also recorded the complete works for flute and piano by Samuel Zyman (Albany Records, 2020), and premiered works by composers David Ludwig, Nick Omiccioli, and Polina Nazaykinskaya.

Silvije Vidovic | received a full scholarship to study in the United States with Kemal Gekic in 2003. His potentials as an emerging young artist was immediately recognized when he won the first prize at Florida International University’s Concerto Competition in 2004, which followed with a series of concerts organized by the Guild for International Piano Competition. Mr. Vidovic continued his musical development at Boston University studying with Dr. Jonathan Bass. While there, he was employed as a teacher assistant, and in 2008 was the winner of the Richmond Piano Competition. In August 2012 Silvije completed his Doctorate of Musical Arts in Piano Performance at the University of North Texas, where he studied with the renowned Russian pianist and pedagogue Vladimir Viardo.

Silvije‘s audio recordings have been released by Croatia Records, Art-Net Club, and Akadem Records. Furthermore, Mr. Vidovic has been featured in four documentary films produced by the Croatian National TV, which chronicle the lives and artistic careers of the three Vidovic siblings. Since 2011 Mr. Vidovic has been sponsored by the Concert Music Tour organization, which resulted with his performance in Vienna's Musikverein Golden Hall. Mr. Vidovic is a co-founder and Artistic Director of Karlovac Piano Festival and Karlovac International Piano Competition.