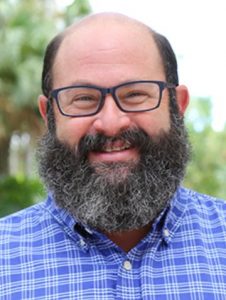 A ZOOM Conversation with Professor of Portuguese a...

Join us on Thursday, March 10, 2022 at 6:30 pm EST for a ZOOM Conversation with Professor and Author Steven F. Butterman

The event is free, open to the public and conducted via ZOOM.
CLICK HERE TO REGISTER
Upon registering a link and password will be automatically emailed to you.

Associate Professor of Portuguese and Director of the Portuguese Language Program since 2000, Steven F. Butterman teaches Portuguese language courses and Brazilian literature and cultural studies in the Department of Modern Languages and Literatures at the University of Miami, where he also directed the Gender & Sexuality Studies (GSS) Program and directed the Steering Committee to launch the minorin LGBTQ Studies. Butterman has published books and articles on a wide range of topics, focusing on transnational LGBTQ+ studies, gender and feminist studies in the cultural contexts of Portuguese- speaking countries. Butterman’s current research agenda culminates in the publication of his third book, Queering and Querying the Paradise of Paradox: LGBT Language, New Media and Visual Cultures in Modern Day Brazil. London: Rowman Littlefield International, forthcoming in June 2021. In addition to his academic work, Butterman has also served as an expert witness on asylum petition cases involving homophobia, lesbophobia, transphobia, and domestic violence in Brazil, Estonia, and Honduras.

About Queering and Querying the Paradise of Paradox

This book provides readers with a study of the characteristics that make life unique for sexual minorities in Brazil while also viewing Brazil in relation to global LGBT sociopolitical movements. It critically assesses the complex relationship(s) between the visual arts and political activism, carefully analyzing artistic, cinematic, and photographic representations of LGBTQ identities. Brazil provides a useful case to example, with the cultivation of ambiguity in contemporary (re)constructions of queer life. In this book, the author conducts the first comprehensive discourse analysis of the dynamics and features of the largest LGBT Pride Parade in the world. This problematizes and analyzes the relationship between burgeoning critical socio-political movements and institutions and the language and new media discourses used to configure and conceptualize them. The aim of this project is to create a theoretical scholarly framework promoting linkages between political activism and academic scholarship and by using discourse analysis, the intricacies of terminology Brazilian sexual minorities adopt and adapt, illustrating the development of LGBTQ identities through performative language use.