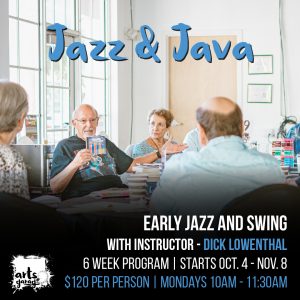 The origins of Jazz, including blues, work songs, and gospel. Using the city of New Orleans as a starting point, the class will listen to and discuss the music of Louis Armstrong, King Oliver, Jelly Roll Morton and many others, and the sociological implications associated with the music.  From there, we’ll study the changes of Jazz in Chicago and New York City and how the music evolved into Swing.  The artists will include Duke Ellington, Benny Goodman, Fletcher Henderson, Count Basie, Harry James, Gene Krupa, and Glenn Miller, and various vocalists who started in the Swing Era.  The classes will also include listening to recordings, recommended readings, films, and attendance at live concerts.

Session 2: Jazz and The Movies

Jazz and the Movies are a natural combination.  The two 20th century art forms started side by side.  With the passing of so many Jazz greats over the past 50 years, one can only experience the music and presence on recordings and films.  We will explore three basic types of films that utilized Jazz:  full-length Hollywood movies; all-Black movies made specifically for Black audiences; and special music shorts.  It will range from Duke Ellington’s “Black and Tan” (1929) and “Stormy Weather” (1943) through Swing Era bios such as “The Benny Goodman Story” (1955) and “The Glenn Miller Story” (1953); and films with contemporary subjects as “The Connection” (1961), “’Round Midnight” (1986), and “Whiplash” (2014).   The classes will include recommended home listening (some films will have minimal rental fees), several in-class recordings and film shorts, and discussions.