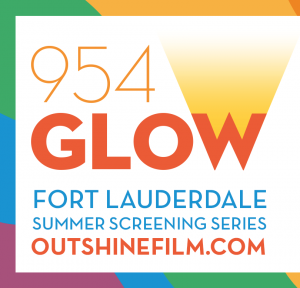 OUTshine LGBTQ+ Film Festival is presenting one lgbtq+ film a month, in person at Gateway Cinema in Fort Lauderdale and virtually on OUTshine At Home. $5 In-Person screenings to encourage our audiences to get back in theaters post-covid.

#954GLOW is BACK at Gateway Cinema this Summer! Join us Saturday, once a month, as we bring our lgbtq+ film community back together IN theaters. Tickets are only $5. For those still hesitant to join us in-person, a virtual option will be available for 10 days following the in-person screening, for free.
AFTER THE FILM, join OUTshiner's at BRGR STOP near the theater for food and conversation.

954GLOW Summer Series Line-Up:
JUNE: Summer of ‘85
June 26 @ 5pm at Gateway Cinema
In-Person Screening Only
16-year-old Alexis’ boat capsizes off the coast of Normandy and 18-year-old David heroically saves him. Alexis has just met the friend of his dreams, but will the dream last for more than one summer?

JUNE: Give or Take
June 27 - July 4 - Virtual Screening Only
When a disillusioned New Yorker's father dies, he goes home to Cape Cod and prepares the house for sale while sharing it with his father's temperamental live-in boyfriend. Grieving, they circle each other, butt heads, and negotiate how to remember the man they both loved.

JULY: Swan Song
July 24 @ 5pm at Gateway Cinema
July 25 - August 1, Watch Virtually at home
An aging hairdresser escapes his nursing home and embarks on an odyssey across his small town to style a dead woman's hair for her funeral, rediscovering his sparkle along the way.

AUGUST: My First Summer
August 21 @ 5pm at Gateway Cinema
August 22 - 29, Watch Virtually at home
Two girls, both outcasts yet very different personalities, become friends and then more as they find strength in each other after a tragedy brings them together.

Free to watch virtually on OUTshine At Home platform.

OUTshine Community Meet-Up after the film at BRGR Stop near the theater for food and conversation.