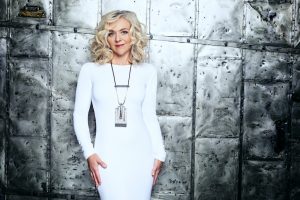 Rachel Bay Jones is best known for originating the role of ‘Heidi Hansen’ in the Original Broadway Cast of Dear Evan Hansen, and received a Tony Award, Emmy Award, Grammy Award, Lucille Lortel Award, and Drama League Nomination for her performance. She can currently be seen on the hit ABC series “Modern Family,” CBS’ “God Friended Me,” and in the feature film “Ben Is Back,” opposite Julia Roberts. She stars in the upcoming feature film “Critical Thinking,” directed by and opposite John Leguizamo, and in the upcoming Amazon television series “Panic.”

Tickets for all performances will go on sale to the general public on October 1, exclusively through Eventbrite and can be accessed via a link to the Eventbrite page on OldSchoolSquare.org, Members of Old School Square will receive advance notice and access to tickets for all performances for both the Broadway Cabaret and MusicWorks Concerts series. Old School Square’s 2022 Membership Program, complete with new membership benefits, will be announced and available on June 28, 2021.