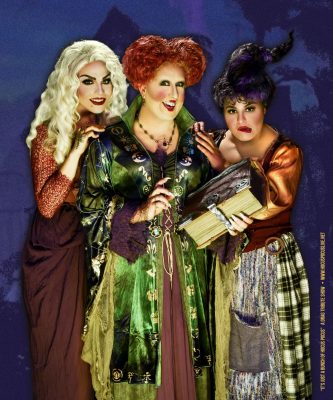 IT’S JUST A BUNCH OF HOCUS POCUS Lands at The Ke...

Presented by Nicole Halliwell at The Kelsey Theater

South Florida’s favorite Halloween show, IT’S JUST A BUNCH OF HOCUS POCUS is landing at The Kelsey Theater in Lake Park for two nights of holiday fun on October 30 and 31.

South Florida’s favorite Halloween show, IT’S JUST A BUNCH OF HOCUS POCUS* (previously Hocus Pocus Live) is landing at The Kelsey Theater in Lake Park for two nights of holiday fun on October 30 and 31 (performances are at 7 p.m. and 9:30 p.m. each night; each runs 1 hour and 15 minutes). Tickets are on sale with the opportunity to save $10.

Following eight consecutive years of instant sell-outs, the wildly popular all-ages tribute show brings Halloween’s most beloved classic to life with incredible detail. The audience is invited to take a dive into ‘90s nostalgia as South Florida’s top drag performers transform into the film’s iconic characters. All are invited to join this limited-seating, socially distanced event as they tell the story of three wacky witches, accidentally resurrected by teen pranksters on Halloween night in 1993. The dynamic lead cast includes Nicole Halliwell as Winifred Sanderson, Calypso Monroe as Sarah Sanderson and Nicky Monet as Mary Sanderson.

Produced and created by South Florida’s drag mastermind Nicole Halliwell (TLC’s I am Jazz, America’s Got Talent, Queenz The Drag Experience), IT’S JUST A BUNCH OF HOCUS POCUS boasts intricately detailed sets, eerily uncanny lookalikes, replica props and costuming, and more in this immersive stage spectacle. Going light years beyond your standard “drag show,” there’s nothing quite like this!  Prior to each performance, audiences can enjoy “Wicked Villains,” a “delightfully evil preshow,” starring the cast of QUEENZ The Drag Experience as even more fabulous female impersonators transform into such favorite cartoon villains like Maleficent, Ursula, Cruella DeVille, and The Evil Queen.

Tickets are now on sale starting at $65 for general admission, and $75 for “front row” VIP, which includes a souvenir gift pack. To save $10 off any ticket, use coupon code SAVE10 at checkout to unlock discounted tickets which can be purchased by visiting www.hocuspocuslive.net, by calling The Kelsey Theater at (561) 328-7481, or the Boca Black Box Theater at (561) 483-9036. Performance tickets will be limited to comply with COVID-19 community health and safety guidelines. Proceeds from ticket sales will benefit the show’s displaced and furloughed cast of entertainers due to the pandemic. *Celebrity impersonators, no affiliation with the Walt Disney Company.

This live production is sponsored, in part, by Tate’s Comics & Games www.tatescomics.com.

$65 for general admission, and $75 for “front row” VIP, which includes a souvenir gift pack. Save $10 off any ticket, use coupon code SAVE10 at checkout