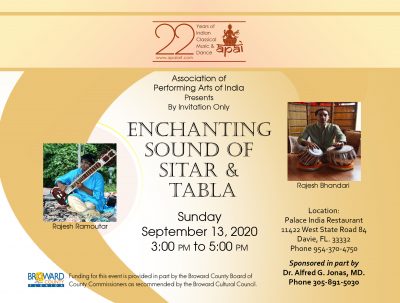 Enchanting Sound of Sitar and Tabla

Presented by Association of Performing Arts of India at Palace Resturamt

Rajesh Ramoutar is a sitarist living in Fort Lauderdale, Florida, and has been learning sitar from Bharti Chokshi for over 10 years. He has also received training from numerous musicians including Vidushi Manju Mehta, Pt. Krishna Mohan Bhatt, Vidushi Anupama Bhagwat, Shri Chirag Katti, and many more.

In compliance with Broward County COVID Regulations, the concert is open to ten persons only.  Masks must be worn.Attendance is by invitation only.Following the concert, a video of the event will be posted on APAI’s Youtube channel later.Follow us on:www.apaiart.com              https://www.facebook.com/APAI.Florida/https://twitter.com/apaiarthttps://www.instagram.com/APAI.south.florida/?fbclid=IwAR0a3GnxOn3YNCtnwkzzeLIuq_fm0jgeOIY02AhLBrYZH5iC0kcsSUwHATQhttps://www.youtube.com/playlist?list=PLFDE2D7A38A69129E