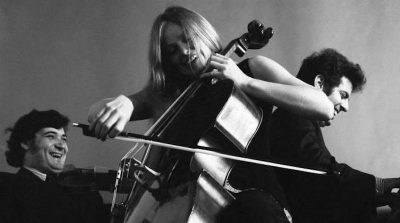 SATURDAY NIGHT IS MUSIC MOVIE NIGHT WITH SOUTH FLORIDA SYMPHONY! Join your SFSO friends on our Facebook page or YouTube Channel as we watch Mademoiselle, about Nadia Boulanger, one of the most respected conductors and teachers of all time. This 1977 film, directed by Bruno Monsaingeon, reveals the force and the flavor of a character who exerted considerable influence on the musical life of the end of the 20th century.

SFSO pianist, Sofiya Uryvayeva Martin brings you “The Music You Love”, featuring a variety of thrilling works that will bring you joy and make your heart sing. Be swept away by Broadway hits, sultry tango, ballet classics and more.

The “king of the music documentary”, Christopher Nupen, directed a 2-part series on Pytor Ilyich Tchaikovsky that uses music and commentary by Tchaikovsky, as well as by some of his closest companions (rather than actors), to document his life. The first film, Tchaikovsky’s Women, looks at the women both in his private life and in his early music.

In Part 2 of Christopher Nupen’s film series on Pytor Ilyich Tchaikovsky, called “Fate”, the focus shifts to Tchaikovsky’s extraordinary relationship with Nadezhda von Meck; the most important in his life, after his mother, as well as his increasing concern with the idea of fate as a controlling influence in his own life and as a motivating force in his later symphonies.

IT’S MUSIC MOVIE NIGHT WITH SFSO! Jacqueline du Pré was one of the greatest cellists of all time; however, her international career was cut short by Multiple Sclerosis – she stopped playing cello at the age of 28 and died at the age of 42 in 1987.