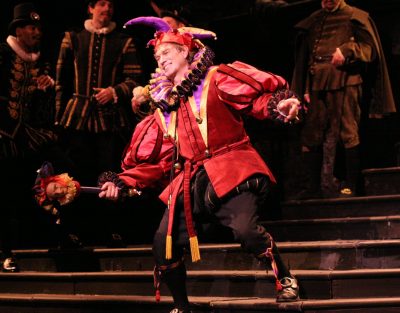 A court jester makes cruel sport of courtiers whose wives and daughters are seduced by the Duke until his own daughter falls victim.

The grand master of opera, Giuseppe Verdi, ramps up his musical and dramatic intensity to the highest level in this masterpiece. Baritone Todd Thomas as Rigoletto makes cruel sport of courtiers whose wives and daughters are seduced by The Duke of Mantua, sung by tenor Piotr Buszewski in his FGO debut. It’s not until his own young daughter falls victim, Gilda, sung by Grammy Award-winning soprano, Jessica E. Jones, that the dishonored jester plots a savage revenge. But he loses everything when he is double-crossed and his plan goes fatally awry. One of Verdi’s most powerful scores brings this intensely moving drama to life-and death, conducted by Pacien Mazzagetti in his FGO debut.

Sung in Italian with English and Spanish projected translations.