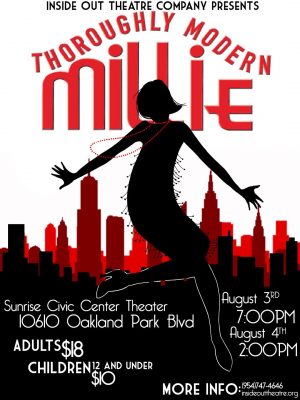 “Winner of six Tony awards, this musical takes you to the height of the Jazz Age in New York City, where “moderns” are raising their hemlines, entering the workforce, rewriting the rules of love and like others seeking to discover themselves”! MTI

"The winner of six Tony Awards, including Best Musical, Thoroughly Modern Millie was the 2002 season's most awarded new show on Broadway! Based on the 1967 Academy Award-winning film, Thoroughly Modern Millie takes you back to the height of the Jazz Age in New York City, when "moderns," including a flapper named Millie Dillmount, were bobbing their hair, raising their hemlines, entering the workforce and rewriting the rules of love. This high-spirited musical romp is a delightful valentine to the long-standing spirit of New York City and the people who seek to discover themselves there".  MTI shows. Presented by Inside Out Theatre's Advanced Intensive