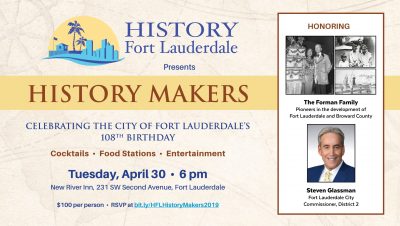 History Fort Lauderdale, proud steward of our community’s past by making our heritage accessible and engaging to residents and visitors, will honor The Forman Family, Broward County pioneers and early developers, and Fort Lauderdale Commissioner, District #2, Steven Glassman during its History Makers 2019 fundraiser set for Tuesday, April 30, at 6 p.m., at the New River Inn. The event spotlights individuals who have made an impact on the growth of the City of Fort Lauderdale.

For over a century, the Forman family has been major contributors to the development of Fort Lauderdale and Broward County.  Ever since Hamilton and Blanche Collins Forman arrived in 1910, they, and their descendants, have played leading roles in the fields of agriculture, business, water management, education, public service and philanthropy. Dr. Charles Forman and his brother Hamilton Forman were Broward's most powerful political figures from the 1950s to the 1990s. When their pioneer dairy farms and pastures were closed to facilitate the building of Florida's Turnpike in the mid-1950s, the family turned their attention toward education and building a world-class education complex on their land. Today, the former farmland houses campuses of Florida Atlantic University, Florida International and the University of Florida's Broward complexes, Nova elementary, middle and high schools, Broward Community College and Nova Southeastern University.

Fort Lauderdale City Commissioner, District #2, Steven Glassman, has been a foremost advocate of historic preservation, arts and culture and philanthropy in Broward County for close to 25 years. For 11 years, Glassman was an administrator for the Broward County Cultural Division where he worked closely with elected officials and business leaders to further the quality of life in all of Broward's major cities through the arts and culture. This work included serving on advisory boards in Hollywood, Miramar, and Pembroke Pines. He has served on the City of Fort Lauderdale's Beach Redevelopment Advisory Board (three years) and the Planning and Zoning Board (six years). His many years in various civic leadership positions include president of the Broward Trust for Historic Preservation and a seven-year tenure as the president of the Central Beach Alliance. Steve has also served as president of several beach condominium associations including his current six-year tenure at the Sapphire Condominium. He has remained focused on fixing our city’s infrastructure via smart growth and proactive future planning.

This year’s event will also celebrate the city’s 108th birthday with cocktails, food and drink stations from Ruth's Chris Steak House, CA Catering, LauderAle, Gran Forno and more to be announced plus themed entertainment on the downtown Fort Lauderdale campus.

Tickets for this year’s History Makers Gala are $100 (online service charges not included) and can be purchased online at http://bit.ly/HFLHistoryMakers2019 or via email at info@flhc.org. Seating is limited.

History Fort Lauderdale, formerly known as Fort Lauderdale Historical Society, brings the stories of our diverse community to life through engaging educational experiences, innovative cultural exhibits, research and preservation of artifacts. Residents and visitors to Fort Lauderdale are invited to explore the city’s rich past that is housed in historic buildings on a lushly landscaped campus - the History Museum of Fort Lauderdale situated in the 1905 New River Inn, the 1907 Pioneer House Museum, the 1899 Ivy Cromartie Schoolhouse Museum and the Hoch Research Library, South Florida’s foremost history center housing print resources and newspapers from 1910 - present plus 400,000 archival photos, 2,500 maps and 5,000 architectural blueprints. History Fort Lauderdale is located at 219 Southwest Second Avenue in Fort Lauderdale. Museum hours are Monday – Friday from noon – 4 p.m. and Saturdays and Sundays from 9:30 a.m. – 4 p.m. History Fort Lauderdale is a nonprofit agency supported by memberships, grants and charitable contributions.

Tickets for this year’s History Makers Gala are $100 (online service charges not included) and can be purchased online at http://bit.ly/HFLHistoryMakers2019 or via email at info@flhc.org. Seating is limited.