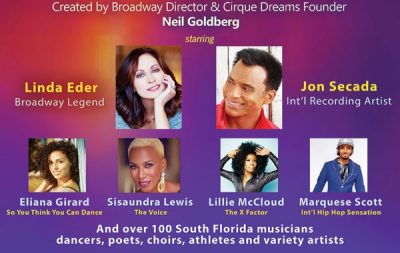 WE... The Passion & Rhythm of the People

Presented by Broward 100 at Broward Center for the Performing Arts

Broadway Director and Cirque Dreams Founder Neil Goldberg and Broward 100 announce the greatest Broadway-style Broward spectacle ever - "WE"... The Passion & Rhythm of the People . This one-of-a-kind, Broward County production, is part of the County's weekend-long grand finale centennial celebration, Duende, and will be performed on Saturday, October 3rd at the Broward Center for the Performing Arts.

"WE"... is a show illuminating Broward County's culture, talent and diversity with awe-inspiring performances, spectacular theatrics and stunning visuals. Renowned celebrity artists will be joined on stage by a cast of more than 100 brilliantly-talented South Florida musicians, dancers, poets, choirs, athletes and creative variety acts celebrating the community "WE" call home.

The finale performance will be in concert with other Broward 100 performances, events and family-friendly activities. Stay tuned for more Broward 100 updates in the Cultural Division E-newsletter and the fine arts magazine Cultural Quarterly.

Secada and Eder are the first celebrity entertainers announced to perform in "WE" on Saturday, October 3 at the Broward Center for the Performing Arts in the Au-Rene Theater. They will be joined by other popular artists and performers still to be announced along with the hometown cast of "WE," comprised of hundreds of brilliantly talented South Florida musicians, dancers, poets, choirs, athletes and variety acts ranging in age from nine to 70+.

Known for his spectacular imagination as a theatrical impresario, Goldberg states, "Adding Linda and Jon to the "WE" production heightens this once-in-a-lifetime entertainment experience and performance. Audiences are sure to be entertained by memorable performances of every genre under the sun, all the while showcasing the best of Broward."

As a two-time Grammy Award-winning recording artist with mega hits such as "Just Another Day," Jon Secada is a dynamic, versatile, live performer and international superstar who tours and performs all across the globe. Jon first gained prominence in Gloria Estefan's Miami Sound Machine. He has performed with opera legend Luciano Pavarotti and recorded a duet with Frank Sinatra, "The Best Is Yet to Come" from Sinatra's Duets II album. He has also recorded duets with pianist Jim Brickman and Grammy winning icon, Olivia Newton-John.

Showcasing one of the greatest contemporary voices of our time, Linda Eder's diverse repertoire spans Broadway, standards, pop, country and jazz.  Starring in the original Broadway musical Jekyll & Hyde, Eder blew the roof off New York's Plymouth Theatre each night as she belted out signature songs "Someone Like You" and "A New Life".  Her Broadway debut, for which she received a Drama Desk nomination, sent her already rapidly rising star blazing across the sky, securing her spot as one of America's most beloved singers and dynamic live performers.

Goldberg, recently announced that after the performance of "WE" the audience will vote for their favorite local performer who will win a $10,000 cash prize sponsored by the Neil Goldberg Dream Foundation.  Additionally, the Foundation will award each of the five runners up with $1,000 cash prizes.

Ticket prices range from $25 - $85, not including service or handling charges, and are available through Ticketmaster, online at BrowardCenter.org, in person at Broward Center's AutoNation Box Office or by calling 954 462-0222.  VIP Dinner & Ticket packages are $160 and include front orchestra seating and pre-show dinner in the Mary N. Porter Ballroom from 7-7:45 PM.