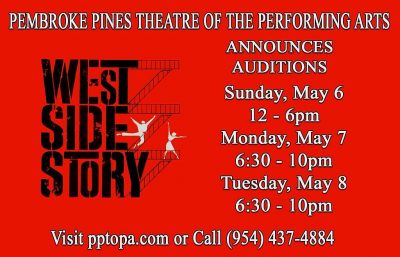 Inspired by William Shakespeare’s play, Romeo and Juliet, the story is set in the Upper West Side neighborhood of New York City in the 1950s and explores the rivalry between the Jets and the Sharks, two teenage street gangs of different ethnic backgrounds. The infamous score includes Maria, Tonight and I Feel Pretty.

Bring sheet music (an accompanist will be available)

Be prepared to read from the script if asked

Monday through Thursday evenings from 6:30-10pm beginning May 29

The show requires a large cast consisting of teenagers, young adults and adults. In addition to numerous speaking roles, the Ensemble will participate in several large production numbers and is an integral part of the production.