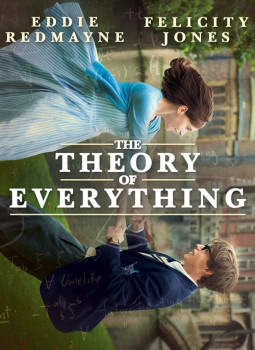 Stephen Hawking: The Theory Of Everything

By Ali Berger What is time? Is it a humanized concept, translated into complex algorithms best left for scientists to decipher? Can it be likened to a continuous equation to which there is no end,…

What is time? Is it a humanized concept, translated into complex algorithms best left for scientists to decipher? Can it be likened to a continuous equation to which there is no end, and no beginning? And furthermore, does pondering these questions mean having to weigh them against theories of God, or personal religious beliefs? Did God create time? Or is time just a way for us to keep track of moments, a way to categorize this thing called life?

These thoughts and many more ran through my mind as I enjoyed, Stephen Hawking: The Theory Of Everything (2014). Director James Marsh (Man on a Wire, Project Nim) captivates a personal account of world-famous physicist Stephen Hawking, and what it’s like to live with motor neurone disease (ALS). The film celebrates Hawking’s ingenuity and accomplishments, while beautifully relaying the love story between he and Jane Hawking.

The theory of Thermodynamics can be used to try and understand energy and emotion. In a philosophical way, The Theory Of Everything mimics Tom Stoppard’s famous play Arcadia, where the characters try to travel back in time and figure out a mathematical equation for that messy human emotion; love. As a genius physicist who claims there is no God, Jane Hawking teaches Stephen about love and emotion, while respecting his scientific creed. They fall in love, get married and have three children, all while his challenging disease progresses and eventually paralyzes him to the point of needing a machine to move and talk. She continues to fight for their marriage, but eventually falls in love with her church choir director. In keeping with the theory of thermodynamics, and applying such concepts that are explored in Tom Stoppard’s, Arcadia, the film intertwines science with the terrifically misunderstood emotion of true love. Likewise, in Arcadia, the characters attempt to mathematically define human emotion, which brilliantly conspires with trying to understand the theories of time.

All of these complexities and more come together on screen for well-delivered performances by Eddie Redmayne (Stephen Hawking) and Felicity Jones (Jane Hawking). In addition to capturing what it’s like to live with ALS, the film also delivers a powerful message of hope and perseverance.

I felt more than inspired after watching what Stephen Hawking goes through. He is seventy years old now, and even though doctors said he only had two years to live, he continues to press on with his crippling disability while making invaluable contributions to the world at large.