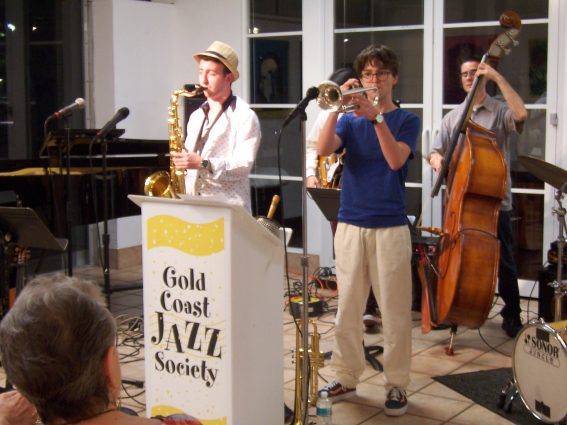 The Gold Coast Jazz Society’s (GCJS) Jeanette M. Russell Jazz Scholarship Program is responsible for the partial support of close to 300 students and half a million dollars in donations. Some scholarships have been awarded…

The Gold Coast Jazz Society’s (GCJS) Jeanette M. Russell Jazz Scholarship Program is responsible for the partial support of close to 300 students and half a million dollars in donations. Some scholarships have been awarded to students for all four years of their music programs at accredited schools across the nation, and some of its recipients are now performing to international acclaim around the world, rubbing shoulders with superstars.

Grammy-nominated Saxophonist Patrick Bartley appeared on The Late Show with Stephen Colbert; Miami-born pianist, vocalist, and composer Chris Cadenhead is the musical director for KC and the Sunshine Band; and Trumpeter Jean Caze is either performing or recording with the likes of Herbie Hancock, Aretha Franklin, Michael Bublé, Mariah Carey, Al Jarreau, Roy Hargrove, Arturo Sandoval, and George Duke. These are a few of the success stories that started in Broward County.

There are more who attended Dillard High School’s Music Program with Band Director Christopher Dorsey, and New World School of the Arts in Miami, under the dedicated tutelage of Jim Gasior, Director of the NWSA High School Jazz Ensemble. Most have jammed with GCJS’s improv Friday Jazz Jams.

While GCJS’s scholarship program impacts jazz, education and youth, it is only part of the story. The Broward County jazz circuit is highly respected among high school students serious about their jazz. Their experiences in Broward enhance their progress and the circuit’s recognition beyond Broward gives them credibility from the start.

“We remember the days when Russell Hall played as a high school student at our First Friday Jazz Jams,” says GCJS Executive Director Pam Dearden. “He’s now a successful working musician. We’re proud to have played a role in Russell’s music education.” Hall comes back often to perform in the Society’s Concert Season, as do many of the alumni.

Russell Hall says, “what I learned at First Friday Jazz Jams, that no person or school teaches, is the grace of talking and listening musically; and the skill of sharing in ideas through notes and keys on instruments…Piano, Bass, Drums.”

Dave Chiverton, another acclaimed alumnus who returns to perform for the GCJS Concert Series, is currently touring internationally with various major talents such as Lauryn Hill, Jon Secada and Donnie McClurkin. Los Angeles musician Carey Frank is a touring performing and recording artist, arranger, composer and teacher; and David Leon is a Cuban-American saxophonist, woodwinds player, and composer/improviser living in Brooklyn, New York. South Florida native and trumpeter Anthony Hervey recently made his international debut as a bandleader at the Bern Jazz Festival in Switzerland, and saxophonist Markus Howell is a composer and educator from Deerfield Beach and a current member of the legendary Count Basie Orchestra and travels throughout the world.

As the band plays on in South Florida, new talents emerge and the now seasoned jazz musicians light the way. Gold Coast Jazz Society stays committed to Jeanette Russell’s vision to enhance the lives of young musicians with a passion for playing music and the art of jazz. This year’s scholarship awards have been made possible with donations by Teri Pattullo in the name of Brian Pattullo and from donations from the Elizabeth and Daniel O’Connor Family Foundation.