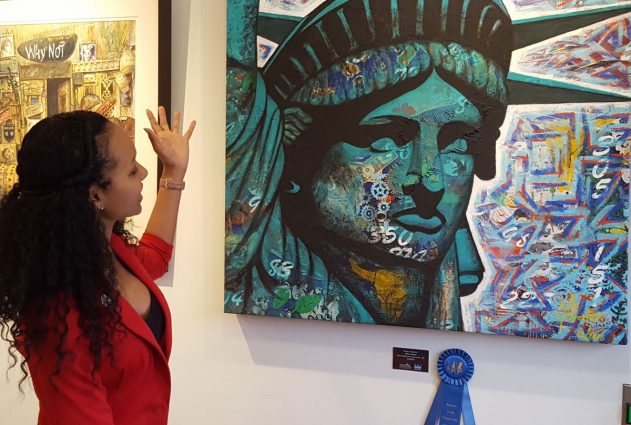 Carla Hibbert, a senior recreation program coordinator for Fort Lauderdale with “The Statue of Liberty” by Milton Prestes.

Every work that lines the walls of the historic South Side Cultural Arts Center reflects its creator’s outlook and is a unique blend of materials and technique. The 20/20 Visions exhibition in Fort Lauderdale views…

Every work that lines the walls of the historic South Side Cultural Arts Center reflects its creator’s outlook and is a unique blend of materials and technique. The 20/20 Visions exhibition in Fort Lauderdale views the world through the lens of local artists upon entering a new decade.

“It’s not predominantly one media, not one person, not one style; it’s lots of variation,” said Susan Clemmons, president of Women in the Visual Arts. “It’s all done differently… Acrylic is used in the many of the paintings. However, it’s used differently in all the subjects.”

Women in the Visual Arts partnered with the city of Fort Lauderdale to present the juried exhibition at the renovated 1922 two-story school. It’s the nonprofit’s second show at the cultural center that offers the community educational classes and event space.

When organizers issued the call to artists in January, they sought 2D and 3D art with a family-friendly Fort Lauderdale vibe. Jurors selected 25 artworks from more than 100 submissions.

Every piece in the diverse group ties into the 20/20 Visions theme, said Carla Hibbert, a senior recreation program coordinator for Fort Lauderdale. Visitors will see the range in both large and small works done in contemporary and traditional styles.

“The Statue of Liberty” by Milton Prestes was chosen best in show and won $500. The dramatic collage conceals facts and historical clues among its American icons and stylized numerals.

Maria Aimone, show manager for Women in the Visual Arts, said Prestes captured the spirit of the show.

“The work and love he put into it expressed what we wanted to do,” Aimone said. “His technique had collage, pencil stroke, chalk, pastel and an acrylic component. It’s a well executed piece.”

Other standouts in the gallery include “The Mane Thing” by Laurie Hein. The painting focuses on a pair of galloping horses.

“You can feel the breeze in the horses’ hair,” Hibbert said.

“Several pieces are mind blowingly good,” Clemmons said. “It’s one of those shows you can see for what it is and take it in. But spending time with it takes it to another level.”

Aimone added, “You do want to spend time there and look at the paintings. If you can bring a friend it’s even better, and it becomes a conversation.”