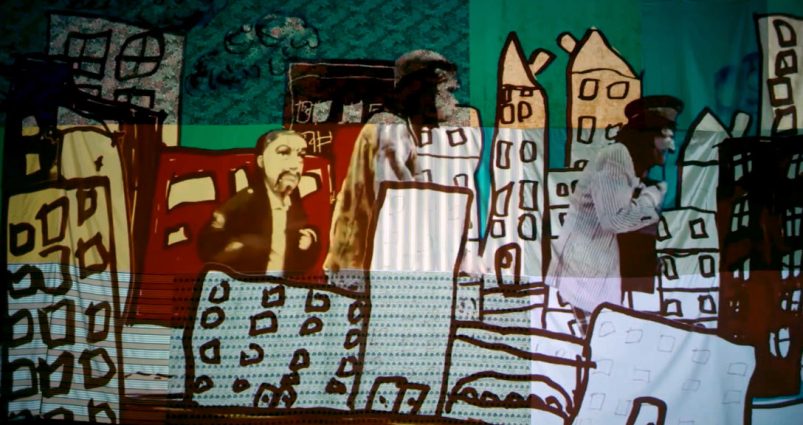 The Persistent Caravan: Art and Immigration in the Pandemic Age

If life’s the journey, there’s no beginning or end for viewers roaming “The Persistent Caravan”— FATVillage Art District’s immersive installation by South Florida-based artists Aurora Molina and Edison Peñafiel. Taking over the 8000-square-foot exhibition space, the artists merge textiles and technicolor animation to capture the global odyssey of migrants. Projected on a massive quilt encircled to create an amphitheater of color, the video installation shows masked travelers crossing an endless, surreal landscape towards a new life.

Watching these wanderers trek through deserts and mountains, one can’t help think of refugees following similar paths to escape chaos around the globe, especially at America’s southern border. This work, however, “isn’t especially about any specific caravan that’s happening in the world,” explains Peñafiel.“It’s more about the mass movement of people. It’s in our DNA, this need to migrate. We migrate for food, shelter, and, more than anything, safety. That’s why the video loop is seamless, as these events happen over and over.”

The project has personal relevance for the artists, who connected over their shared immigrant experiences (Peñafiel is originally from Ecuador, while Molina hails from Cuba). Coming to America as teenagers, both explored immigration in their practices. Playing with ephemeral light and sound, Peñafiel primarily creates video installations, while Molina explores the power of touch in her textile art ranging from soft sculptures to tapestries.

Working together however meant changing their process, as “we wanted to create a true collaboration, where it wasn’t Edison’s work or mine,” explains Molina. “Stepping out of our comfort zone, we wanted to make our mediums work together, based on our personal experiences and prior bodies of work.”

This began with the projection’s massive quilted backdrop, which Molina made from vintage fabrics. Ranging from delicate 1950s florals to earthy 1970s weaves, it was crucial these textiles had history—a sense of being touched, treasured and left behind. “Fabric has a social memory,” notes Molina. Its subtle textures and patterns “interacted with the projection, creating layers and unexpected moments viewers can discover, ”adds Peñafiel.

Peñafiel also layered images for the video’s Oz-like landscape, composed from drawings by students Molina worked with as the ProjectArt artist in residence at the Miami-Dade Public Library Hispanic Branch in Little Havana. “We spoke with them about this idea of displacement, and how these caravans move from landscape to landscape,” she said. “These kids are mostly sons and daughters of immigrants. I also had three children that came crossing the border. So they really connected with the work. Their contribution felt truthful to the project’s essence.”

Their drawings also defined the installation’s tone, as “this surreal landscape seems magical, but also represents a real situation,” Peñafiel explains. “It’s a huge juxtaposition of innocence and crisis together.”

The children also joined the artists in depicting the traveling figures on a green screen, wearing folk masks collected from across South and Central America. “We let the kids create their own characters, which empowered them to be proud of their cultural traditions,” says Molina. Using these folk figures before on previous projects, “I already had a way of performing these characters,” notes Peñafiel. “But seeing the kids at play really surprised and inspired me.”

The music follows viewers as they exit the quilted arena, where they encounter these children face to face, their likenesses molded into Molina’s fabric marionettes floating in tableaus. Surrounded by vintage suitcases these dangling figures are also on a perpetual journey.

Connecting artists and locals, this project felt integral to FATVillage’s mission of creating a “art-inclusive community” says FATVillage arts administrator, Tayina Deravile. “Works like this deal with a subject matter that is so close to so many of us, so it’s a very important conversation to have in this space.”

Though rooted deeply in South Florida, “it’s a remarkable project that could go anywhere in the world,” shares Doug McCraw, founder of FATVillage Arts District. “It’s what we dream about here in terms of excellence in programming.”

Walking through the space, it’s clear the installation would have been a sure highlight of   FATVillage’s March Art Walk.  Although this event was canceled due to COVID-19, art lovers can still see the work in situ on Vimeo. The installation’s reflection on movement feels even more urgent today. Tourists accustomed to moving freely through borders now find themselves stranded at airports and on cruise ships. And the pandemic has made the migrant crisis more acute than ever, notes Molina. Citing recent reports from Americans for Immigrant Justice, a legal migrant advocacy group, “minors have become the most vulnerable, especially those in the process of separation” she says.