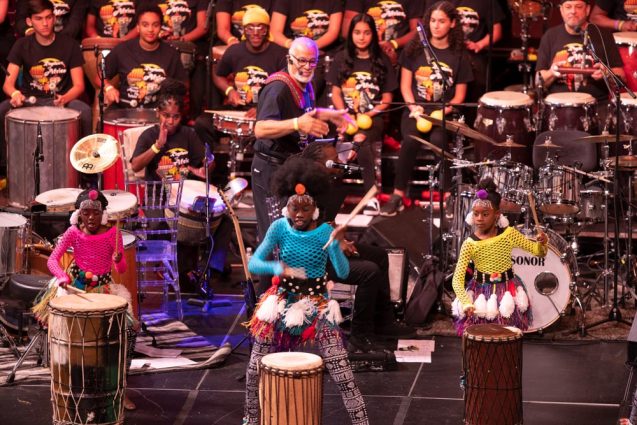 The Power of Percussion

Hundreds of music fans and community arts supporters packed the Charles F. Dodge City Center in Pembroke Pines for the eighth annual Rhythms of Africa concert, a one of a kind global musical journey through…

Hundreds of music fans and community arts supporters packed the Charles F. Dodge City Center in Pembroke Pines for the eighth annual Rhythms of Africa concert, a one of a kind global musical journey through Africa, Cuba, Brazil, New Orleans, Jamaica, Puerto Rico, Trinidad and Tobago and beyond.

Led by Willie Stewart, a Grammy-nominated percussionist who drummed for the iconic reggae acts Inner Circle and Third World and performed with headliners like Stevie Wonder and Michael Jackson, it united local students and an audience of all ages with a dynamic show featuring pulse-revving Afrocentric rhythms. From Djembe drumming to jazzy tunes such as “When The Saints Go Marching In,” “Grazing In The Grass” and Havana meets Kingston renditions of “Mi Tierra” and “Despacito,” the show combined instruments, music and live dancers for a high energy experience for the senses.

It was the first time the Pembroke Pines Charter High School students who were on stage ever performed before an audience. For 15 weeks, they had worked with Stewart in preparation through his non-profit Embrace Music Foundation that is dedicated to restoring, preserving, and fortifying the impact of music in schools and communities.

Stewart, who was born in England to Jamaican parents, has lived in Pembroke Pines for 20 years, and is also a current recipient of Broward Cultural Division’s Cultural Diversity Program grant. The Embrace Music Foundation is a means for him to share his love of music with future generations.

“Our mission is to encourage children and families to come together,” Stewart said.

Music can change anything. It’s very healing. Through music, these kids are getting something they never got before. Music is something everyone can relate to. It helps them focus, concentrate and make new friends.”

“The idea for this show was started in Liberty City in 2004. I was teaching drum lessons and then Parks and Rec started ‘Magic Mondays’ where the children would gather to play drums,” Stewart said. He immediately recognized the positive impact the drumming had on the local youth.

“I believe everybody should experience music in their life,” Stewart said. “Beat a drum. If you’re angry, it could take your frustrations away. If forces you to just be in the moment with no distractions. It’s all about the music for that moment in time.”

Several of the prominent professional musicians involved with Rhythms of Africa have been working with Stewart since the show began. “Jesse Jones on alto sax and Nicole Yarling on violin have been with me since the beginning,” Stewart said. “We play authentically and we’re trying to play songs that are current and mix up the old and the new. We’re showing the rich diaspora our music came from.”

Musical Director and keyboardist Vincent “Vinni” Hamilton has been performing with the show for the past three years and recalls his first encounter with it as a patron. “I had a seat in the nosebleed section and I was awestruck by the power of the music coming from that stage,” Hamilton said. “As I got to know Willie and see his vision, I also became very inspired by the heart he has for keeping music alive in schools.”

“Willie divides the show into different musical sections and we choose the songs that best represent the music of those regions,” Hamilton said. “But one of the greatest parts of Rhythms of Africa is really connecting with the community, getting feedback from our audience and making this music more accessible to everyone.”

Summoning one’s inner child is also at the heart of Stewart’s mission. “Regardless of how old you are, there’s a child in everybody and you have to bring that out,” Stewart said. “We like to make our show as interactive as possible so the audience really feels the music. The students play and the musicians are also inspired by them. Rhythms of Africa is not only cultural and educational, but it’s also fun.”

You can read more about Embrace Music Foundation on their website: embracemusicfoundation.org