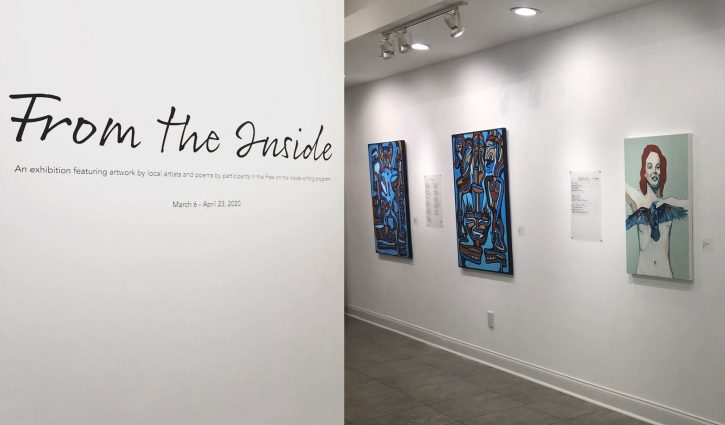 From The Inside - An exhibition featuring artwork by local artists and poems by participants in the Free on the Inside writing program.

Poems written by men incarcerated at the Everglades Correctional Institution are at the heart of 'From the Inside,' a new exhibition opening March 6 at Bailey Contemporary Arts (BaCA) in Pompano Beach. The show, which…

Poems written by men incarcerated at the Everglades Correctional Institution are at the heart of ‘From the Inside,‘ a new exhibition opening March 6 at Bailey Contemporary Arts (BaCA) in Pompano Beach. The show, which runs through April 24, pairs the inmates’ poetry with visual art to convey a powerful message.

The men are all participants in the Free on the Inside program that uses creative writing as a forum to teach communication skills. Its founder, Sharonda ‘Eccentrich’ Richardson, works to provide the incarcerated men – and soon teens at a juvenile facility, as well – with an experience that not only enriches the time they spend on the ‘inside’ but can also help their transition back into society.

In addition to poetry, the men also express themselves through rap, short stories and skits. “We don’t restrict them in their creativity, but we try to get them to be very intentional about what they’re saying.”

When she was young, Richardson made her own mistakes that almost landed her in prison. “Alot of it was because I was angry,” she says. “I was very frustrated, and I really didn’t know how to communicate what I was feeling with other people.”

Poetry helped her put her thoughts and feelings into words that other people understood. “I know how it saved me, so, I thought, let’s create a program to do the same for others.”

The first time she went into the prison, 65 inmates showed up to hear what she had to say. Four years later, Free on the Inside workshops attract between 175 and 200 men.

Each of the visual artists in the show drew inspiration from a poem they personally selected from among the inmates’ work. “That was really important, “to know that the artists were pairing their pieces to something that really meant something to them,” says Juliana Forero, a curatorial consultant for the City of Pompano Beach who organized the BaCA show.

The poems are installed a half inch from the wall and appear to float, evoking the sense of freedom. A colorful collection of paintings, collage and textile sculpture accompanies them.

Forero thinks “From the Inside” can foster conversation about mass incarceration, racial inequities in the justice system, as well as the value of the arts and the need to support them. “It’s a conversation that needs to happen. And it’s our artists and writers who are putting it in the forefront.”

From the Inside Exhibition

Due to COVID-19 the exhibition is not currently open but here’s a talk with one of the artists and more info on the page.