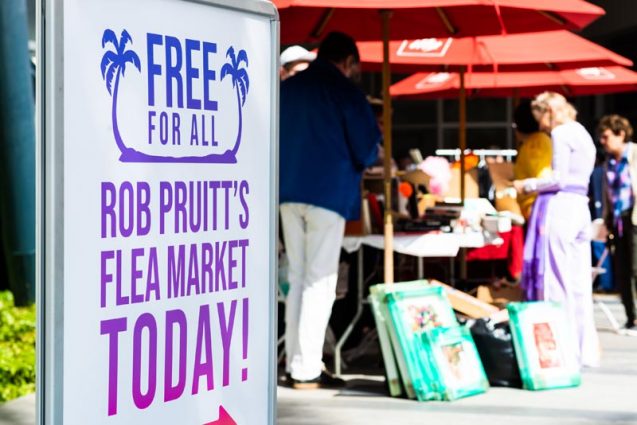 The Evolution of an Artists' Flea Market

On a Saturday afternoon, people wander the aisles of a bustling open-air market. It’s positioned at the breezeway of NSU Art Museum Fort Lauderdale, with tables packed in and filled with curios and artwork. Guests…

On a Saturday afternoon, people wander the aisles of a bustling open-air market. It’s positioned at the breezeway of NSU Art Museum Fort Lauderdale, with tables packed in and filled with curios and artwork. Guests walk from table to table, chatting with local artists about their creations and inspiration, picking up everything from watercolor prints to issues of Architectural Digest from the ‘80s.

They may not know it, but they’re all unwitting actors in a living art piece.

“They don’t even know in most cases that they’re actually participants in an artwork, but they are,” says Bonnie Clearwater, the director and chief curator of the museum. “You don’t even have to be conscious of that. It was a fun experience and that’s something they’re going to remember.”

“It definitely falls within the arena of performance art but it’s also a group show,” Pruitt explains of the flea market. “[At a museum] you stand in front of something, you derive something from it, but with the flea market you get to engage with the artist, you get to hold the thing in your hand, you get to negotiate a price and potentially take it home and live with it.”

For Miami mixed-media artist Emilio Martinez, the interaction was the best part of the day. Sitting before him on his table are works in pencil, charcoal, acrylics and oils, putting his creatures derived from dreams and imagination onto paper.

“When you hear their thoughts of your work, it feeds more of my imagination,” he says. Considering the flea market as an installation or performance – how Pruitt sees it – Martinez became “fascinated with that idea.”

But the artists not only explain their work to those who stop by. Another element has been added by Pruitt: haggling. As artists go back and forth on a price for artwork, Clearwater says it’s a practice in “understanding how value becomes assigned to art.”

Donna Haynes, a Fort Lauderdale artist whose work explores nostalgia, says that the idea of bartering for art was new for her as well as many of those who stopped at her table. Many were not comfortable asking for lower than the artist declared.

“I said, ‘This work is this much money, but it’s up for a haggle,’” she explains. “Some people have taken to it and some people won’t, but it’s very interesting. I haven’t really sold my fine art like this, it’s usually through the sale of a gallery. So, this is a new experience.”

The origins of the flea market go back to 1999, when Pruitt was asked to organize a summer group show at Gavin Brown’s Enterprise in New York City. Having never curated a show before, he worked to find a unique way to bring artists together.

“I spent some time alone with my notebook thinking about, how could I be true to me and then come up with an original concept?” he says. “I thought about the things that I love and one of those things is being part of a community and hanging out with artists and it just occurred to me, it was a lightbulb moment, that the flea market was a way to do it.”

Since then, the flea market has been hosted in cities around the world, including Paris, Los Angeles and Venice.

“There’s a freedom to a flea market,” Pruitt says. “Sometimes a museum can be intimidating…this breaks down those barriers and that’s why it’s so nice that it’s happening right at the entrance to the museum.

It’s working as a big welcome mat to get people in the door.”