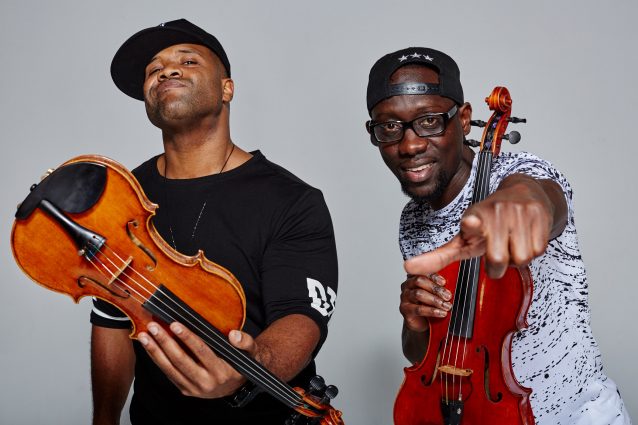 Black Violin: From Broward To Broadway

"There's a book called The Blue Ocean," Kev Marcus tells an enthusiastic audience assembled on a recent Sunday afternoon at the Broward Center's Porter Riverview Ballroom. "It's all about swimming in your own ocean instead…

“There’s a book called The Blue Ocean,” Kev Marcus tells an enthusiastic audience assembled on a recent Sunday afternoon at the Broward Center’s Porter Riverview Ballroom. “It’s all about swimming in your own ocean instead of swimming with everyone else.”

Marcus is one half of the classical and hip-hop duo Black Violin and he references this book to introduce the first track from Black Violin’s fourth studio album entitled Take The Stairs. The song is “Showoff ” and Marcus says, “It’s us doing that thing nobody else knows quite how to do.”

Marcus and Wil Baptiste, the other half of Black Violin, met in 1996 a few miles northwest at Dillard High School of the Performing Arts on their first day of a two-week summer orchestra intensive. “My mama made me do it,” Marcus explains while shouting out his mother in the audience, “but when we got to Dillard, it was considered cool, so I made friends.”

One of those friends was Baptiste, who remembers meeting Marcus at summer school while still a student at Sunrise Middle School. “He was sitting next to me,” recalls Baptiste. “I was first chair and he was second.”

“You were not first chair!” Marcus interjects.

“I saw all these wood instruments,” Baptiste remembers, “and thought I’m clearly in the wrong class. I tried go to the band section, but they told me no, you’re in this class. I was mad. I wanted to play sax, you know, John Coltrane, the cool stuff. It took me a day and a half to even pick up a violin, but after a week, I loved it. It made me feel different.”

“People’s perception of me changed,” he recalls of both their full scholarships to Florida universities. “I would tell people I got a scholarship for violin and they’d say, Really? You?' They could not believe we could play at the level we could. That's how Black Violin came together, but it all started with my mama."

Their creativity and flare didn't stop there, always creating, always evolving. Baptiste notes, "Even back in those days, we were always doing cool stuff to stay in our instruments. I remember Kev wrote this song on his phone using Busta Rhymes' song "Gimme Some More." I was like,Damn, you got a phone!’ But then he taught everyone else and we went to competitions playing this song.”

Cut to 2005, where Black Violin performed on NBC’s nationally televised Showtime at the Apollo, in front of what Marcus calls, “the hardest audience on the planet.” Black Violin was paying its dues on the club scene before Mo’Nique announced their victory. “I don’t even know how we found the money,” Marcus recalls, “we were so broke, but five of us flew to New York. It was the real thing. We rubbed the log and won four times.”

That was the start of our career.” Marcus continues, “Slowly, over many years, we had to build up to this and prove to people that two brothers playing the violin is something your theater wants to book. Since then, we’ve played Broadway, gone to Iraq and performed for our troops and played Obama’s inauguration.”

Today, Black Violin now collaborates with local and national education programs like TurnAround Arts and connects with more than 100,000 students a year, mostly at lowincome and Title 1 schools.

“What is it that Uncle Ben says to Spiderman?” Marcus asks. “We didn’t even think about how kids would react to it. We were just trying to do us, but after not too long, we knew that we had them in our hands, so we had to say something to them.”

The Black Violin Foundation is a non-profit whose mission is helping emerging young musicians make music in a way it’s never been made before. Marcus’ wife, Anne Sylvester serves as the Foundation’s president. The organization presents performance workshops for students that accompany Black Violin’s 150 shows a year. It also awards music scholarships and provides musical instruments to individuals or programs in need and strives to empower youth by working with them in their communities to provide access to music programs that foster creativity and innovation. Baptiste’s wife, Corryn Freeman is the Foundation’s Vice President.

“They were struggling,” Sylvester remembers of Black Violin’s early years, “but they had the drive. They were working hard. It wasn’t like, `Oh, we think we want to do this.’ They were passionate about it so you could see the potential.”

The band is just back in town after two weeks on the road, the outer limit both wives place on touring. The Impossible Tour, which takes its name from the Take The Stair track “The Impossible Possible,” will see Black Violin back out on the road for another two weeks launching their new album in New York.

“We’re learning as we go,” Sylvester laughs, including her BVF vice president Corryn Freeman. But from how successful the work they’re doing is, you wouldn’t know it.