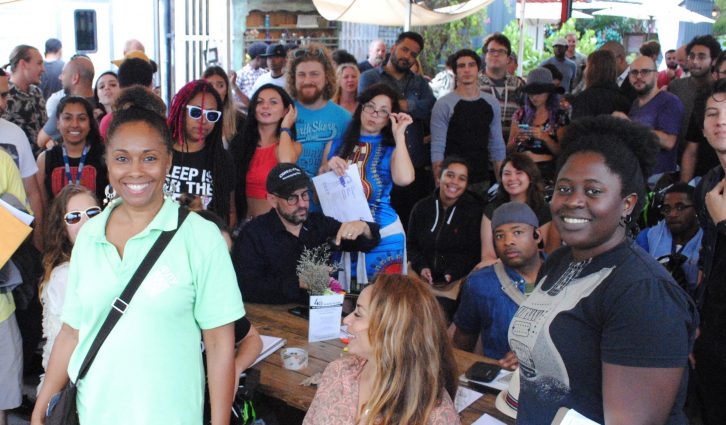 Two days, one prop, a character, and a line of dialogue are the blueprint for teams competing in the 48 Hour Film Project. The international challenge offers novices and professionals a shot at creating a…

Two days, one prop, a character, and a line of dialogue are the blueprint for teams competing in the 48 Hour Film Project. The international challenge offers novices and professionals a shot at creating a short film from page to screen over the course of a weekend.

“It’s a much anticipated annual event,” said Cathleen Dean, city producer of the Miami/Fort Lauderdale project. “A lot of people participate who have never made a film or are not in the industry. Maybe they dream of being the next Martin Scorsese. The 48 Hour Film Project gives them the opportunity to be creative and free, have fun and meet some cool people.”

Dean took on her producer’s role more than 10 years ago. Her first goal was expanding the challenge from Miami-Dade to Broward and Palm Beach counties.

“It was one of the earlier film making events happening in South Florida. It brought people together and was a platform for the community,” Dean said.

“Her caliber as an artist and film producer really added value to the programming,” said Grace Kewl-Durfey, the Cultural Division’s director of community engagement.

“It’s a way for us to cultivate independent filmmakers in Broward County,” Kewl-Durfey explained. “It’s important for young people to see, especially young African American people, that there are individuals working at such a high caliber as Cathleen Dean who are also accessible and who see it as very important to make a contribution.”

Dean said her efforts are a “labor of love” that channel back into the community. Inspired by the 48 hour project, “others have realized their filmmaking dreams and “gone on to form partnerships and so on and get jobs and other fantastic things,” she said.

While Dean’s taught for years at Nova Southeastern University as an adjunct instructor of communication and raised a son, she’s now working to make a career in film.

“I did my undergrad in history at Columbia. I worked in media, TV and radio, and made films outside on my own,” Dean said. “I’ve always wanted an MFA.”

That dream is nearing reality. She’ll complete her Master of Fine Arts in motion pictures at the University of Miami in 2020 with a long list of awards. Highlights include the 2019 Martha’s Vineyard International Film Festival for best juried short and the 2019 Miami Film Festival’s Wolfson Cinemaslam for best film featuring archival material. Previous honors include an Emmy for cinematography.

For her thesis, Dean is working on a feature length film titled “The Catch.” It’s a script she wrote. For help creating a professional-quality movie, she’s launched a GoFundMe.com campaign.

“It could be a game changer if I can successfully produce this feature, a romantic comedy,” Dean said. “It could open a world of opportunity.”

University of Miami assistant professor Margaret Cardillo has watched Dean’s calm presence and thoughtful responses in the classroom: “She has an incredible voice, and she knows how to use it. It’s a voice that should be heard. She has great things to say.”

For more information about The Catch visit GoFundMe.com