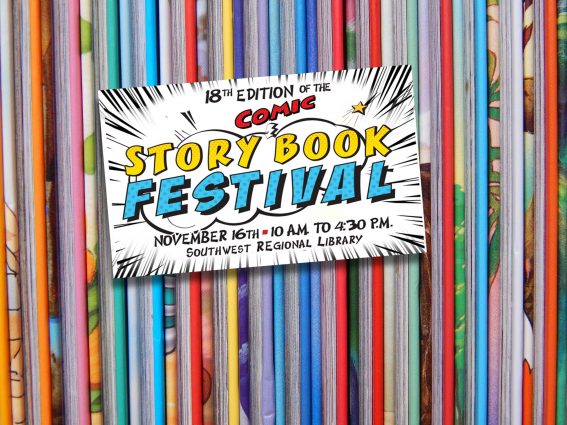 Four-year-old Lavender Goombs twirled around Southwest Regional Library in a Mary Poppins costume complete with matching white parasol. She was one of hundreds of children who attended the 18th Annual StoryBook Festival. Lavender Goombs, age…

Four-year-old Lavender Goombs twirled around Southwest Regional Library in a Mary Poppins costume complete with matching white parasol. She was one of hundreds of children who attended the 18th Annual StoryBook Festival.

This year, 5,704 people came out to celebrate reading, authors and all things creative. And to enhance this year’s comics and graphic novels theme, CatStronauts author and illustrator Drew Brockington appeared at the event to share why he can’t get enough of drawing cats in space.

“The idea for CatStronauts was literally born out of doodles in my sketchbook,” Brockington said. “I researched a lot and went to space camp. My biggest challenge was ‘How do you tell a story and expand on the characters at the same time?’”

During the StoryBook Festival, Brockington demonstrated how he creates comics and the process of writing and drawing them.

“I’ll break down my drawing style so kids can follow me,” Brockington said. “First draw a potato, then add some taco chips on top, then 10 minutes later I have my character and they have theirs. And their characters always have more detail. It’s amazing.”

Brockington’s advice to other aspiring artists and graphic novelists is to draw every day. “I started going to comicons to build a portfolio,” Brockington said. “I began making zines and mini comics.  The first CatStronauts comic was just 10 pages. I brought 100 copies and it sold out.”

An agent eventually approached Brockington and got his comics into some local book stores and everything took off from there. Last year, he began traveling more for library festivals and speaking at schools near his home in Minnesota. Kimberly White, youth services coordinator, was eager to bring him to the 8th Annual StoryBook Festival after his CatStronauts books became a popular request at Southwest Regional Library.

“This was the first year we had a big author be part of it,” said Youth Services Special Events Manager for Broward Libraries Nancy S.Murray. “Kimberly brought Drew in and we were so excited to have him be a part of it and even talked to him about our t-shirt design for the event.”

After many months of planning, this large-scale community event, which included sponsors such as Joe Dimaggio Children’s Hospital, City of Pembroke Pines, the Broward Public Library Foundation and others, was powered by 150 adult volunteers and 92 teen volunteers.

“Amazingly, many of the teen volunteers attended this festival as children,” Murray said. “It’s nice to see how many people want to be involved and continue to help. These events give us a chance to bring people into the library who might not have come here otherwise.”

During the 18th Annual StoryBook Festival, event goers of all ages got a chance to witness fairytales such as Rumpelstiltskin and Sleeping Beauty come to life in the Fantasy Forest, march in a costume parade dressed as beloved storybook characters, create their own comics and enjoy a variety of storytellers.

“Inspiring the community to come to the library is my biggest passion,” said Southwest Regional Library Youth Services Librarian Supervisor Lynn Morrison. “Every day, we have more people moving to this community and we want people to find us. Libraries have so many wonderful resources..”

This year’s theme of comics and graphic novels was also inclusive of those in the community struggling with reading. “Comic books and graphic novels have helped many who have some trouble reading,” Morrison said. “Comics teach fluency with conversation too.”

Southwest Regional Library as well as libraries throughout Broward County have a variety of programs available for all ages, from children to senior citizens. Be sure to visit broward.org frequently to experience all your local library has to offer.