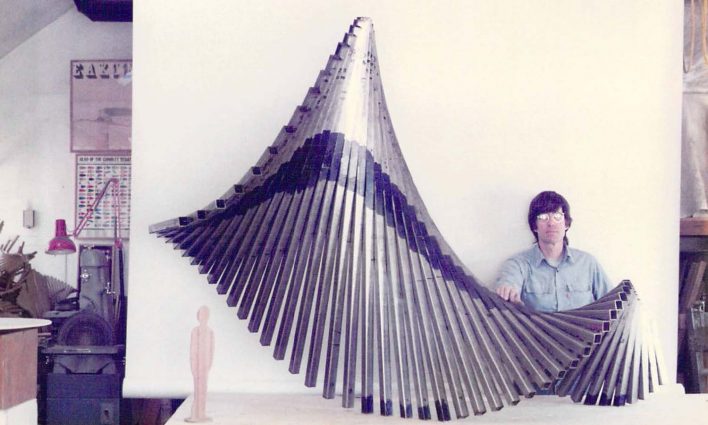 In 1989, the Berlin Wall fell, the movie "Who Framed Roger Rabbit" was a hit, and Fort Lauderdale was trying to shed an image as a rowdy spring break destination. David Lee Brown Sculpture Dedication…

In 1989, the Berlin Wall fell, the movie “Who Framed Roger Rabbit” was a hit, and Fort Lauderdale was trying to shed an image as a rowdy spring break destination.

That year was also the year that the Broward County Art in Public Places program installed a monumental steel sculpture by David Lee Brown at the entrance to Fort Lauderdale-Hollywood International Airport (FLL).

Brown, a contemporary artist based in Maine, used 50 linear rods of stainless steel, held together by thousands of bolts – some 15 inches long – to create a twisting spiral 21 feet high and 35 feet wide. The untitled piece weighs 6.5 tons yet seems poised for flight. It was one of the earliest pieces of public art ever commissioned and installed at the airport, as well as the biggest and most expensive piece of art the county had purchased at the time.

Thirty years later, the airport’s long-term commitment to the public art program is clearly evident, with more than 60 pieces in its impressive collection, including work by leading contemporary artists like Duane Hanson and noted Florida artists like photographer Clyde Butcher. Brown’s sculpture had aged well through the decades but was in need of a good cleaning.

The sculpture stood up beautifully to Hurricanes Andrew, Wilma and Irma as well as to countless tropical storms that pelted the coast with destructive winds and rain. Exhaust from thousands of cars driving by combined with grit and grime that accumulated during construction of the airport’s new runway, however, had formed a hazy layer that clouded the sculpture’s highly reflective surface. South Florida’s natural environment had also taken a toll.

RLA Conservation, which specializes in the care of sculpture, historic architecture and artifacts, was called in. “Sculptures in harsh marine environments deteriorate faster,” says Lucinda Linderman, an assistant conservator with RLA who focuses on large outdoor sculptures. “For example, the sun really fades and causes paint to chalk very quickly here. The salt from the ocean causes surfaces to deteriorate faster. Stainless actually rusts in this environment, which it normally doesn’t in others.”

“It had some rusting around the bottom, and in between the rungs but it was in very good shape,” Linderman says. “We cleaned it, passivated the rust on it and applied wax to those areas where it was rusting.” The project took two weeks to complete.

“Maintenance is critical to maintain the integrity and longevity of artwork, particularly for outdoor sculpture, which is constantly subjected to the elements,” says Christina Roldan, public art project manager with the Broward Cultural Division, who oversees the art at the airport.

In her role, Roldan is responsible for protecting an investment made on behalf of the citizens of Broward County. Like many other cities and counties around the country, Broward has an ordinance that requires two percent of major public-building construction budgets be allocated to art.

“Traveling can be stressful,” notes Michael Nonnemacher, chief operating officer\deputy director of aviation at FLL. “Usually when people travel by air, their anxiety level goes up. I think [public art] takes their mind off the stresses of traveling. It just takes you away from the fact that you’re in an airport for a few minutes.”

When Nonnemacher was hired as an airport operations agent at FLL in 1987, public art wasn’t yet on the scene. “I was here when the first piece of artwork was ever installed as part of the public art program,” he says, referring to William Crutchfield’s work titled `The Importance of Being a Bubble,’ that is now located on the west wall of Terminal 4’s ticket lobby.

Nonnemacher also recalls when Brown’s soaring sculpture had to be moved in order to accommodate construction of a new loop road and relocated to the greenbelt park that borders Griffin Road on the south side of the airport. “I go by there all the time,” he says of the spectacular work. “You cannot miss it.”

Hours of Operation and Location The Greenbelt is open sunrise to sunset. It is located at the intersection of Griffin Road and Northwest 10th Street.