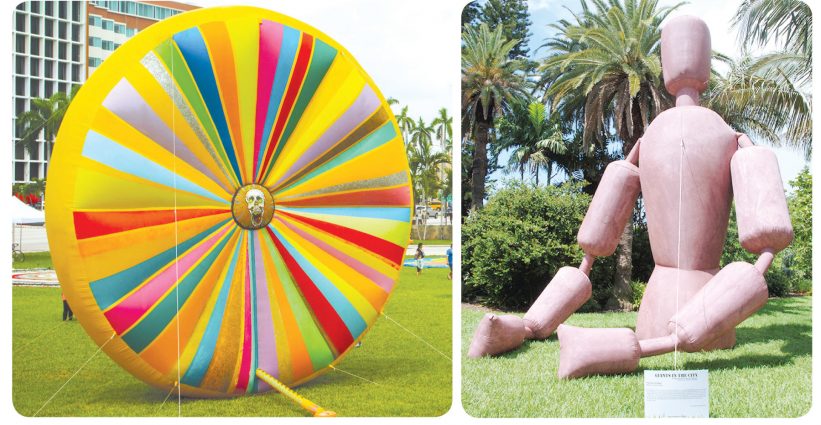 From Ripstop to Riptide

First published in the Fall 2019 edition of Art Hive Magazine. Starting on September 6, giants will be coming to parks and libraries throughout Broward County’s nine commission districts. They’re part of “Searching for Giants,”…

First published in the Fall 2019 edition of Art Hive Magazine.

Starting on September 6, giants will be coming to parks and libraries throughout Broward County’s nine commission districts.

They’re part of “Searching for Giants,” the first-ever countywide display of monumental inflatable art. Nine, two-day outdoor exhibitions will be open to residents and visitors through Oct. 26. Then, the giants will make a reappearance in late November on Fort Lauderdale Beach at the annual Riptide Music Festival.

“Searching for Giants,” a project by Broward Cultural Division, in partnership with Greater Fort Lauderdale Convention & Visitors Bureau and Entercom, is an exciting lead-up to Riptide, the County’s signature event.

People who find and post a photo of the inflatables on Instagram – tagged @BrowardArts with the hashtag #ArtAcrossBroward ­– will be entered into a contest to win two Riptide “Meet the Band” passes at each of the nine locations.

“Searching for Giants” is the brainchild of Meredith Clements, the marketing director of Broward Cultural Division, who describes the displays as having wide-ranging appeal that will capture the public’s imagination. “This is a great example of how the county is able to provide accessible arts programming that is thoughtful and creative – programming that encourages people in our communities to interact with each other as well as interact with the art.” As people go looking for the giants, the county’s leadership also hopes they will discover gems within their own neighborhood.

The towering 20- to 30-foot inflatable sculptures include such forms as a pink and green lollipop, yellow submarine, peace sign and a giant hugging human.

They’re all part of Giants in the City, created by Cuban-born artist Alejandro Mendoza.

Mendoza studied art in Cuba, then moved to Mexico, Argentina and the United States. As a sculptor, he understood that the medium of sculpture can be costly—the mold alone to create a bronze statue can be thousands of dollars. Then there’s the cost of the materials, an architect and working with the city to put a piece on display.

In 2008, he decided to think big with what he calls his “giants.” Using ripstop, the same material used to make parachutes, he was able to create inflatable sculptures while also introducing a more accessible way for artists to create large-scale pieces.

Giants in the City was born.

Inflatables are an inclusive form of art. The pieces are colorful, approachable, and stir up conversations – Which do you like best? Why did the artist choose this subject; or why so big? What does it remind you of? What type of public art would you want to make?

“These pieces break the rules,” said Noor Blazekovic, Mendoza’s wife and Giants in the City co-founder. “They broke the rules of monumental sculpture… because these monumental pieces, they are all inclusive. They want you in. They want you to be part of it.”

“There are 1.9 million residents of Broward County who live in a vast geographic area,” said Tara Rose, “Searching for Giants” project manager. “What is important to me about this project is that it brings art into communities beyond Fort Lauderdale.”

When selecting the inflatables and their locations, Clements and Rose made sure that they were reflective of the diverse communities that make Broward County so unique. It was essential that the artwork and the artists who created them showcased that diversity.

“When you see them you smile,” Blazekovic said of the giants. “We need more positive messages. We need to inspire everybody. Not everybody will go to a gallery,” she notes, “but everybody can consume ‘Giants in the City.’ They’re amazing; they truly are a gem.”

The locations and dates for each “Searching for Giants” exhibition can be found at ArtsCalendar.com/Giants.