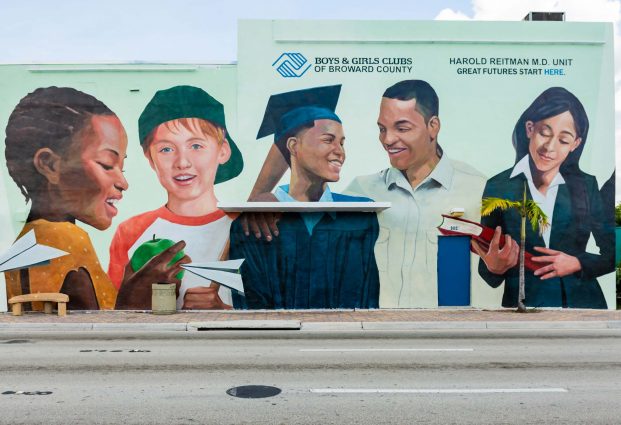 A new mural by Elio Mercado at the Harold Reitman Boys & Girls Club, along Broward Boulevard. By Nila Simon.

If These Walls Could Talk

How can paint on four walls influence a community? If the new mural on the edifice of the Harold Reitman Boys & Girls Clubs is any indication, it can uplift, inspire and better it.P Formerly…

How can paint on four walls influence a community? If the new mural on the edifice of the Harold Reitman Boys & Girls Clubs is any indication, it can uplift, inspire and better it.P

Formerly a white, largely unmarked building – save for the signature Boys & Girls Clubs blue – the Reitman Club’s facade is now blanketed with large-scale images of 12 smiling figures who’ve come to represent the more than 500 families a year who seek this Boys & Girls Clubs location. Wrapped around the building’s exterior are the painted images of individuals from all walks of life – a girl holding a basketball, a boy dressed in full cap and gown ensemble, a girl in a business suit holding a book and other inspiring images of health, happiness and aspirations – serving as refreshing reminders of the positive impact that the Boys & Girls Clubs can have on a community and its youngest members.

“I just felt that an inspiring mural could bring life to this area and communicate what happens inside this building,” says Brian Quail, the president and chief executive officer of the Boys & Girls Clubs of Broward County, of the initial thought behind having a mural on the Reitman building, which is one of three Boys & Girls Clubs-operated buildings owned by the County.

Linking both public and private non-profit organizations together, the mural was a unique collaboration between several organizations. Quail began conversations with Alphonso Jefferson, the assistant county administrator at the BMSD, the government entity that serves the more than 15,000 residents of Unincorporated Broward County, a stretch of 11.4 square miles that the Reitman Club sits in.

Having already incorporated several new art installations in BMSD’s jurisdiction, Jefferson didn’t need to be convinced of the power that public art can have. Last summer, the BMSD commissioned artist Ruth Burotte to transform nearly a dozen metal traffic signal cabinets from uninspiring metal structures that were heavily defaced by graffiti to vivid expressions of the surrounding neighborhood. Today, more than half a year after Burotte completed her public arts project, the colorfully painted traffic boxes remain in near-pristine condition and largely untouched by graffiti, Jefferson says.

“I saw how art can really change a community’s mindset,” Jefferson says. “It’s as if Ruth’s artwork on these traffic cabinets have wordlessly inspired the community to be better stewards. This shows how powerful art can be in not only bringing pride to a community, but also inspiring its people to be better.”

To take the next step in creating a mural on the Reitman Club building, Jefferson and Quail connected with the Broward Cultural Division, the County’s local arts agency that has overseen the commissioning of more than 260 public artworks, who held a call to artists to submit a design for the edifice. Eventually, a five-member panel chose the design of South Florida-based artist Elio Mercado, aka Evoca1, to grace the building’s exterior.

Known for his photorealistic murals that have appeared from far away as Australia to as near as downtown Hollywood, Mercado wanted the Reitman mural “Untitled” to be part of a movement that promoted positive opportunities and experiences.

“The mural encompasses the ideology of the community and the youth who visit the Boys & Girls Clubs. I wanted the mural to continue to inspire those visiting or just passing by, inspiring people to be more than they can dream up.”

If These Walls Could Talk

The Reitman Club, named after prominent orthopedic surgeon Harold Reitman who donated the building to the Boys & Girls Club, had 502 members walked through its doors last year. Of those, 99% qualify for free or reduced school lunch, 60% have a household income of $20,000 or less, and 77% come from a single-parent home. As Quail puts it, the Boys & Girls Clubs provides vital services to these at-risk youths. Alumni include Rep. Bobby DuBones, Sen. Chris Smith, Rep. Bobby DuBose, and Rep. Shevrin Jones, all of whom have visited local Clubs to inspire youths.

Through its various academic, character-building and healthy lifestyle programming, Quail says 99% of its members progressed to the next grade level last year. Part of that programming includes a year-round fine arts program, providing members weekly lessons and activities in drawing, painting, digital photography and other media. The results of the arts program speak for themselves, with 27 Broward County club members winning national art awards.

“The mural is a celebration of art and the quality of art programming produced inside this building,” Quail says. “It has, to me, became a way for us to say that arts are important.”

In addition to serving as a visual representation of the Boys & Girls Club’s purpose, the mural has enhanced Broward Boulevard’s streetscapes and aesthetic appeal. And BMSD has more public art installations in the works, Jefferson says. Freestanding sculptures representing the history, culture and sentiments shared by BMSD residents and stakeholders will line Northwest 27th Avenue along the northwest corner of the green space at the African-American Research Library and Cultural Center.

“We’ve seen that art can uplift a community,” Jefferson says. “And projects like Elio Mercado’s mural at the Reitman building and the upcoming one on Northwest 27th Avenue can help be a driving force to it.”