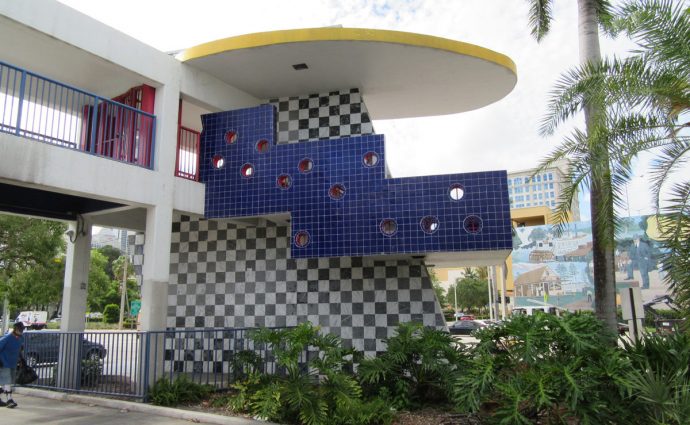 Stair #1 at Broward Central Terminal, by Laurinda Spear of Arquitectonica

An asymmetrical shock of ceramic checks and polka dots of blue and white, a red hand rail, an elliptical halo of yellow and punchy portholes - the south-eastern staircase of Broward County's main bus terminal…

An asymmetrical shock of ceramic checks and polka dots of blue and white, a red hand rail, an elliptical halo of yellow and punchy portholes – the south-eastern staircase of Broward County’s main bus terminal has been greeting over 3000 passengers a day from 14 different Broward Transit Authority bus routes for almost 30 years.

Stair Number One is one of more than 260 artworks commissioned by Broward Cultural Division’s Public Art and Design Program since its foundation in 1976.

The staircase has become an icon of the city of Fort Lauderdale – a dash of fast-paced modernism from a team of designers well known for putting South Florida’s buildings on the map. It was designed in the spring of 1990 by Laurinda Spear – principal at Arquitectonica, a nationally known Coral Gables firm that tends toward the avant-garde. The $9.9 million terminal itself was constructed by Miami firm Post, Buckley, Schuh & Jernigan (now part of Atkins Global).

“We wanted to create something that really was a locus, that called attention to itself. The colors that we selected all had to do with speed, monumentality and proportion. The black and white checks create the impression of a racing flag, while the bright colors catch the attention of passing motorists”.

Arquitictonica’s work coincided with Miami’s emergence as a young, cosmopolitan and vibrant city; their first buildings would prove to be synonymous with Miami’s new cultural identity. The Atlantis, with its hole punched right through the middle – it’s red jacuzzi, yellow spiral stair and tilted palm tree became an instant hit. Then Spear House, with glass block insets and planes of bright pink. The firm’s compelling and colorful buildings were soon to be found across the country and around the globe.

The sculptural and the pictorial intertwine in Arquitectonica’s work. Form and facade interact. Simple shapes are skewed. A space that might be circular is instead almost an ellipse; a structure that would have been a square comes out trapezoidal. The middle of a building sits off-center on its base as if it had been rotated.

The firm now has over 850 employees working in eight other cities from Paris to Shanghai and is currently building in 58 countries around the world. Their work in Miami continues apace as the 4.9-million-square-foot Brickell City Center development opens – the new anchor for downtown Miami, which includes a 500,000-square-foot luxury mall. Today Laurinda Spear also designs and produces furniture, fashion accessories, and objects for the home and office. ArquitectonicaPRODUCTS draws inspiration from the work of Arquitectonica by translating architectural elements into everyday applications such as furniture, watches and clocks, neckties, scarves, wallets… even street furniture such as bus shelters and benches.

Broward County’s Art in Public Places Board – now Broward Cultural Division’s Public Art & Design program – chose the $25,000 staircase design as a way to integrate art and architecture and to provide an entrance to a future pedestrian bridge across the busy Broward Boulevard.

Arquitectonica’s involvement served to add a little Miami magic to Broward’s modern transportation hub, recently expanded by the opening of the new Brightline terminal just to the west. Plans for the pedestrian bridge may have been consigned to history, but the checkered flag still greets downtown travelers with a dramatic flourish.

Stair #1 in the Public Art Directory > 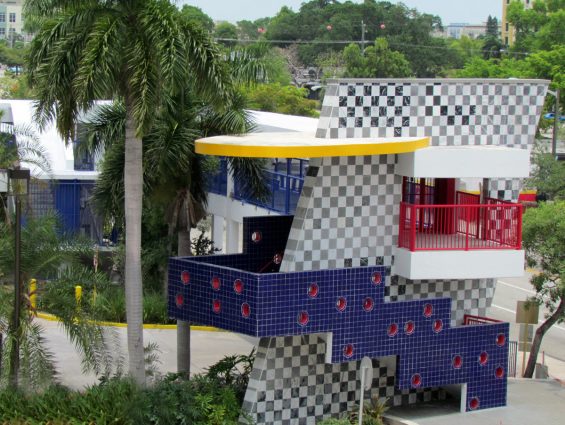 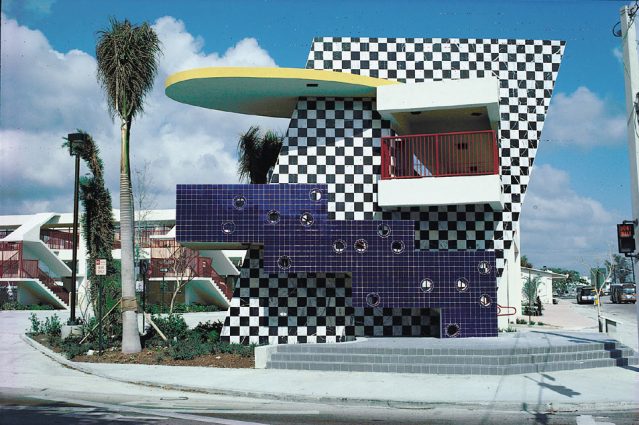 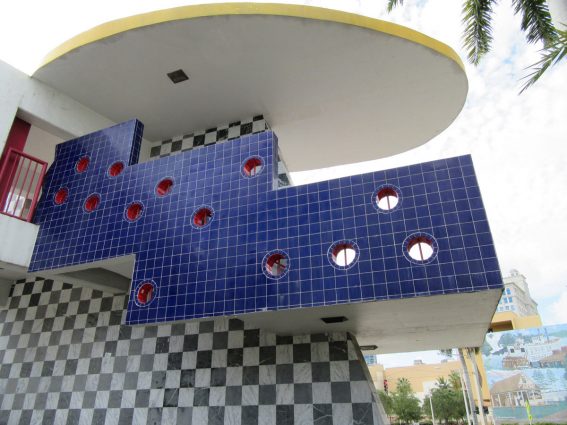