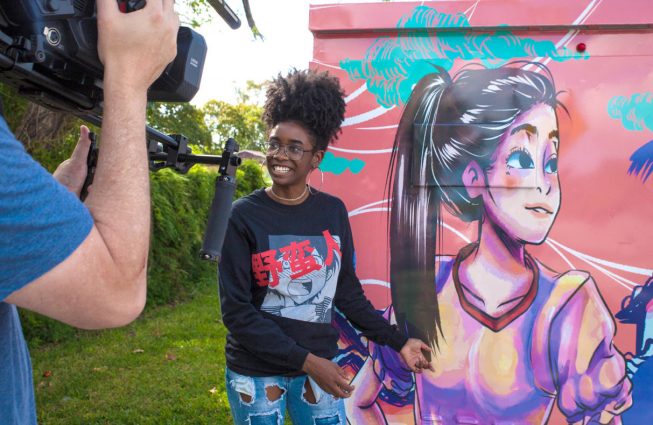 It’s not every day you see an artist cruising a skateboard passed the artwork they created, but for 20-year-old Ruth Burotte, the streets of Broward County have become her canvas. As the youngest artist to…

It’s not every day you see an artist cruising a skateboard passed the artwork they created, but for 20-year-old Ruth Burotte, the streets of Broward County have become her canvas.

As the youngest artist to ever receive a commission from the Bro­ward Public Art & Design program, Burotte uniquely wrapped eight traffic signal cabinets in the Broward Municipal Services District (BMSD) with her custom designs. The cabinets had previously been cluttered with graffiti and unsightly posters. Now, each cabinet fea­tures a colorful portrayal that reflects the surrounding community.

Blocks from MLK Elementary School, the formerly mundane box now proudly represents the school’s namesake.
“I felt pretty honored that I was the youngest to ever get a commission. It made me feel like an actual professional,” Burotte said about her expe­rience working with the Broward Cultural Division’s Public Art & Design program.

Born in New York, raised in Georgia and then making South Florida her home four years ago to attend Dillard High School, a charter school in Broward County with a reputable arts program, Burotte – who speaks En­glish, Creole and some French – exhibited her artwork in Coral Springs and Fort Lauderdale before graduating in the top 10 percent of her class. She’s currently pursuing a Fine Arts degree at New World School of the Arts in Miami through a scholarship.

“The art scene in Florida is hidden, like a treasure chest,” said Burotte, who began making art at the age of two. “But once you find it, you get very impressed something so underground can be so complex.”

Broward Public Art & Design Project Manager Dominique Denis has found Burotte’s art to be an important addition to the local art scene as well as the community.

“Ruth Burotte’s artwork is bright and easily recognizable. We received a lot of positive feedback from members of the community after the instal­lation of her artwork throughout the BMSD,” Denis said. “This positive re­sponse could be attributed to the fact that the artist conducted several community engagement activities with different community stakehold­ers prior to her designing the artwork. This was an important step in help­ing her create works of art that are reflective of the community.” 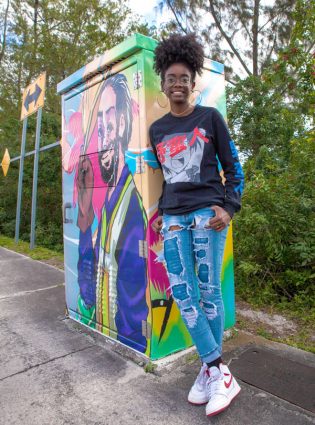 Much of Burotte’s inspiration for her work has been cultivated while as­phalt surfing on her skateboard or taking public transportation around Broward County. “I ride the bus a lot,” Burotte said. “Sometimes, I take the train. And my skateboard is basically my car.”

While listening to hip-hop, rap, jazz and the occasional old school tune from Notorious B.I.G., Burotte is able to submerge herself in the everyday street life of the Broward scene like few other artists could. “Not only do I get inspired by streetwear and Japanese comics/manga and magazines, but also graphic designs, Japanese calligraphy and traditional ink draw­ings,” Burotte said. “I always like to make bold and rough ink lines when I create my work.”
She also has three murals in Broward. One that is deeply meaningful to her is an anti-violence mural painted down the street from her alma ma­ter, Dillard High School.

The mural, which is by a corner store in an area nicknamed “Death’s Cor­ner” due to the frequent crimes that happen there, has become a center­piece of conversation in the community. The shop owner was grateful to Burotte for invoking a message of peace through her art. Working with acrylic, spray and wall paint, Burotte sketches most of her designs out in her sketchbook to see what will work or won’t work. She always makes sure her own style shines through.

BROWARD PUBLIC ART & DESIGN PROJECT MANAGER DOMINIQUE DENIS HAS FOUND BUROTTE’S ART TO BE AN IMPORTANT ADDITION TO THE LOCAL ART SCENE AS WELL AS THE COMMUNITY.

One of the highlights of Burotte’s flourishing career happened recently when she was flown to Europe in June to work with one of her favorite brands, Adidas.

“Adidas contacted me to be part of the P.O.D. System,” Burotte said the new Adidas shoe campaign, which was inspired by the past and re-imagined for a new generation of wearers. “I was representing the City of Miami. They saw my work and I went to Germany and London to work on my own limited-edition Adidas shoes. I got to see the Adidas archives. As such a lover of fashion, it was a dream come true.” 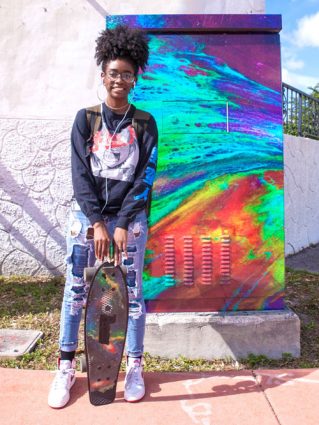 During her time in Europe, Burotte was thrilled to get a taste of the art scene there and snap a selfie with Grammy Award-winning producer Pharrell Williams, who has a shoe line with Adidas.

While Burotte prepares to work on her biggest mural ever this October, which will be a 40-foot high piece in Coconut Grove commissioned by philanthropist Stephanie Ansin, she ultimately hopes her work will inspire people, especially other aspiring artists. “My work is right on the street,” Burotte said. “It gives me peace of mind knowing people can see my work while they’re walking to school or wherever they’re heading.”

“I was representing the City of Miami. They saw my work and I went to Germany and London to work on my own limited-edition Adidas shoes. I got to see the Adidas archives. As such a lover of fashion, it was a dream come true.” – Ruth Burotte

Burotte was also surprised to see how many Broward youths now have an interest in art because of her work.
“For other artists out there, who want to get more ex­perience, find out about all the ‘call to artists’ hap­pening and submit your work. Find out, sign up and never look back. Go out into the community and ask if you can do murals. Be proactive in your community,” Burotte emphasized.

When Burotte is not creating art, she admits she’s re­searching it or looking up art and fashion shows that are happening. “I love reading comics. My favorite character from well-known comics is ‘Tank Girl’,” Bu­rotte said. “And from the animation side, my favorite set of characters are from a show called ‘FLCL.’ Not only do I admire the dynamic animation, intense at­mosphere and essential way of storytelling, but I also admire the creator for producing something out of pure passion and expressed interests of the things he likes. That’s something that I want my works to always follow—a dynamic narrative expressing my interests in whatever medium I decide to create art with.”