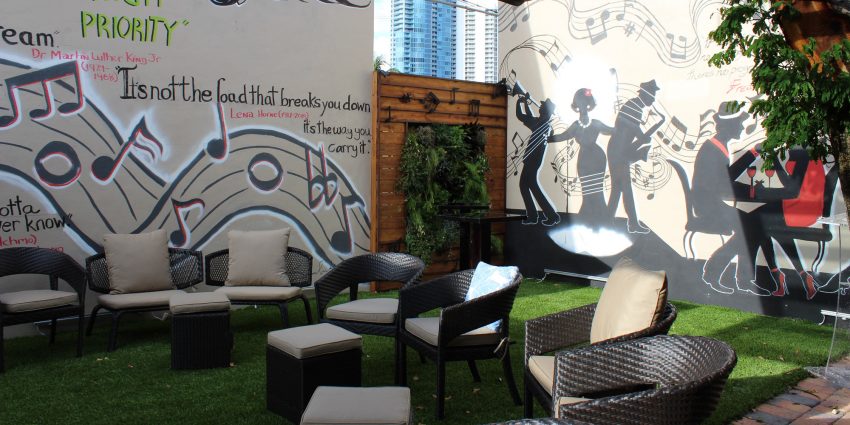 At the NYSW Jazz Lounge.

Miguel Pilgram’s love story with jazz does not begin as a child listening to records. Rather, it begins on the Indian Ocean during the Gulf War. He and his fellow sailors were aboard the USS…

Miguel Pilgram’s love story with jazz does not begin as a child listening to records. Rather, it begins on the Indian Ocean during the Gulf War.

He and his fellow sailors were aboard the USS Kiska when they heard that another ship struck a mine not too far away—the water was so still on the ocean that they could feel it. Shaken by the close call, a sailor brought out a John Coltrane album, introducing Pilgram to the genre.

“It’s the manifestation of pain,” he explained. “It came from blues and blues was the music of slavery and all these people could sing about was negative times. Jazz was the affirmation that there was a light at the end of the tunnel.”

That light at the end of the tunnel lives in the NYSW Jazz Lounge, Pilgram’s newly opened jazz restaurant and lounge in Fort Lauderdale, flanked by other new businesses The Grind coffee shop and Tarpon River Brewing.

After four years in the Navy, Pilgram attended Tennessee State University and then worked in casino security—His skills as a regimented Navy sailor worked perfectly with the discipline and structure required in the surveillance arena. From there, he went back out on the water as a manager aboard Malaysian cruise lines, which were eventually bought by Norwegian Cruise Lines. In 2010, he started his own real estate company, the third of what he calls his “number of successful careers.”

The fourth? Restaurants. He opened New York Subs and Wings and Cheesecakes in Oakland Park in 2015, where the hungry can get a taste of New York style comfort food. From there, he expanded the business into a new concept, the NYSW Jazz Lounge—the initials carry over the restaurant venue while adding in entertainment.

“I worked in a blues city, in Memphis, for a number of years and when I arrived here, I fully understood that there was a thirst for live music, but there weren’t any real venues that are dedicated to it.”

The interior bar is an intimate 900- square-foot space, and outside is a 1,400-square-foot al fresco bar and courtyard. The space is decorated with Edison light bulbs, paintings of jazz pioneers, powerful quotes, silhouettes of performers and dancers on the walls, and music notes. However, the stand-out pieces are the bar in the shape of a piano and stage created with a shipping container. There, the likes of Tito Puente Jr., Sabirin Yamin Mustafa, Eric & The Jazzers, the Marcus Mitchell Project, and other performers get the crowd swaying, snapping, and dancing. Once a week, the venue hosts a spoken word night.

Throughout Fort Lauderdale and surrounding neighborhoods, there are plenty of places to listen to jazz—if you go on a jazz night. At the NYSW Jazz Lounge, no matter what day or time you come in, there’s jazz wafting in the air. From class to soulful, progressive, Latin, it’s all forms and tendrils of jazz on stage. And he doesn’t want to be the only one. He admires Blue Jean Blues on 33rd Street, and he hopes that with their success, other venues and entrepreneurs will see that jazz is something the people want.

But Pilgram isn’t done yet. On the horizon, he has plans to open another venue, Memphis Blues, in Sistrunk to complete the musical family of jazz and blues—plus more ventures.

“I think it’s going to be phenomenal,” he said. “Fort Lauderdale needs a dedicated blues venue that is sizable enough, where people can really have a great experience.”

This article originally published in Art Hive Magazine Issue #26, which can be found here.