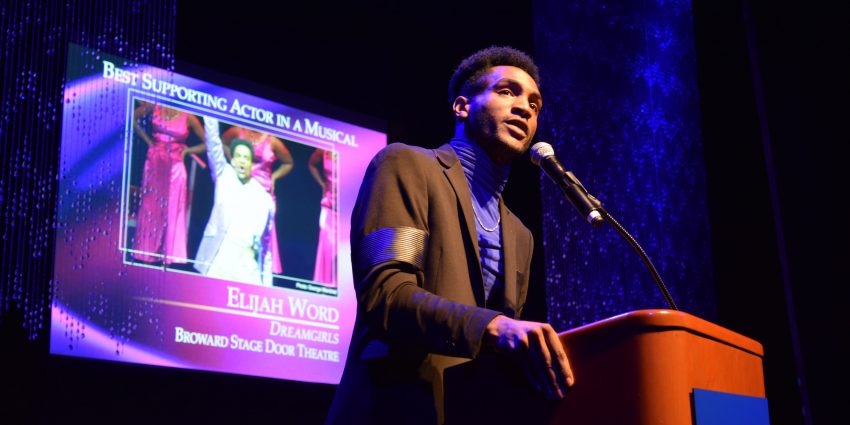 Elijah Word, alumnus of Marjory Stoneman Douglas High School in Parkland, received the Best Supporting Actor/Musical Carbonell for his role as James “Thunder” Early in the musical, Dreamgirls, at the Broward Stage Door Theatre in Margate.

A historical drama and a fanciful biography swept the 42nd annual Carbonell Awards at the Broward Center for the Performing Arts. But a group of teenagers captured the hearts of the crowd. Seven students from…

A historical drama and a fanciful biography swept the 42nd annual Carbonell Awards at the Broward Center for the Performing Arts. But a group of teenagers captured the hearts of the crowd.

Sawyer Garrity, who composed the song with her friend Andrea Peña, said it was written to “help people heal through the arts.” The poignant lyrics moved many in the full house to tears.

“We wrote this song during a really dark time in our lives when we both needed a little light, and we thought the best thing was to do what we really love which is music,” Peña said.

In response, the Amaturo Theater audience jumped to their feet and applauded with the deepest outpouring of support seen that night.

The event, known as South Florida’s answer to the Tony Awards, recognizes the best theatrical productions throughout the tri-county area.

“Sunday in the Park with George,” an imaginative biography inspired by the life of Georges Seurat and his iconic 1884 painting, secured a Pulitzer Prize for creators Stephen Sondheim and James Lapine in 1985. The Zoetic Stage show won three Carbonells leading with best production of a musical; Angela Espositio for best costume design, and Eric Alsford for best musical direction.

Upon accepting his trophy, Alsford said “Sunday in the Park with George” was a “huge, ambitious undertaking” and one that he can now cross off his “bucket list.” Among musicals crowning this year’s picks are Palm Beach Dramaworks’ murderous thriller “Sweeny Todd.” Clive Cholerton snared best director for a musical and Shane Tanner best actor in a musical.

Al Blackstone garnered best choreography in a musical for his work in “Newsies” at the Maltz Jupiter Theatre. In the play category, David Kwiat claimed best actor for his role in “The Caretaker” at Zoetic Stage where he played a scruffy, aging homeless man. The production also earned best scenic design in a play or musical for Michael McClain.

Stuart Meltzer’s humorous script about a gay man and dysfunctional family relationships picked up best new work for a play or musical for “The Goldberg Variations.” The multi-talented Meltzer entered the competition with five nominations – the most of any nominee – but the Island City Stage production stood out as his sole win.

Best actress in a play went to Niki Fridh for her role as a female military pilot in the Thinking Cap Theater’s “Grounded.” Fridh gave a shoutout to the “playwrights who give us the magical words” that fuel extraordinary roles and a director who trusted her ability.

Carolyn Johnson, who played a pioneering matriarch in “Flyin’ West” at M Ensemble, was named best supporting actress in a play.

For her portrayal of Janis Joplin, Mallory Newbrough was named best supporting actress in a musical for The Wick’s “Beehive.”

Best lighting and design was awarded to Thomas Shorrock for the Slow Burn Theatre Company’s “The Secret Garden.” Best sound design went to Anton Church for “¡FUACATA! Or a Latina’s Guide to the Universe” at Zoetic Stage.

The ceremony was punctuated with several dynamic performances including two plucked from musicals. Move On from “Sunday in the Park with George” and As We Stumble Along from “The Drowsy Chaperone” provided a glimpse into the quality of local productions.

Prior to the event, the Carbonell special awards were announced. Recipients claimed their golden, oval-shaped statuettes at the ceremony.

Tony Finstrom, a longtime theater luminary, accepted the Charlie Cinnamon Award. Deborah Margol, recently retired deputy director of the Miami-Dade County Department of Cultural Affairs, took home the Howard Kleinberg Award. Popular director and instructor Gail Garrisan held the George Abbott Award for outstanding achievement in the arts. Nicole Stodard, founder of the Thinking Cap Theatre, earned the Ruth Foreman Award in recognition of the yearlong GAP Play Reading Series, which raised awareness of gender bias in the industry. Of 86 Pulitzer Prize-winning plays from the past 100 years, merely 15 are penned in full or part by women. Each month the series featured a staged reading of 11 of those works.  “This one’s for the ladies in the house,” Stodard said, raising her Carbonell. “Let’s get more freakin’ plays written by women produced.” During his presentation Bill Hirschman, one of a dozen judges serving on the Carbonell voting panel, praised the work of the theater arts community. As a well-traveled critic, Hirschman said the caliber of theater in South Florida ranks among the best anywhere in the country – and it often goes unappreciated. “You have no idea of the quality of work you do and how good you are,” Hirschman said. “I’ll put you up against anybody.”

This article originally published in Art Hive Magazine Issue #26, which can be found here.