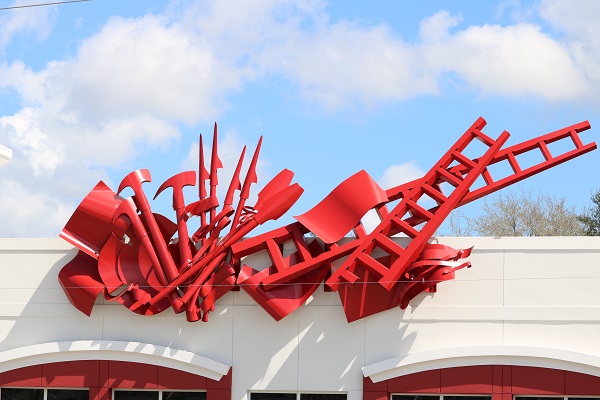 By Allegra Nagler Reaching up to the sky, sculptor Albert Paley’s bold and symbolic red steel sculpture, Vigilance, sits atop the City of Tamarac’s new Fire Station 78 on W. Commercial Boulevard next to the…

Reaching up to the sky, sculptor Albert Paley’s bold and symbolic red steel sculpture, Vigilance, sits atop the City of Tamarac’s new Fire Station 78 on W. Commercial Boulevard next to the Turnpike.

“Albert Paley’s sculpture respects traditional fire service values and traditions,” said Tamarac Fire Chief, Mike Burton. “It’s an honor to have him create this piece of art as a tribute to our fire fighters.”

Paley and his design were chosen by the City’s public art committee and selected from more than 150 applicants. The large, modern and striking sculpture reflects the City’s new emphasis on rebranding its image and looking toward the arts to set the tone.

“My intent is to give the firefighters and the fire station a sense of symbolism and dimension,” said world-renowned sculptor Albert Paley, who created the sculpture specifically for Tamarac.

“My vision is to illustrate the passage of time and the ephemeral nature of life,” he said after the dedication of the new artwork on May 11.

“I wanted to distill the essence of what it means to be a firefighter and illustrate their dedication with a bold design and statement and a presence to create a sense of place and community,” says Paley, who is known for his monumental architectural ironworks and sculptures throughout the U.S., Europe and Mexico.

“Vigilance is part of the city’s new upscale branding,” said Mayor Dressler. “Today is a blue-ribbon day for Tamarac.”

The artist, who began his career as a jeweler, is the first metal sculptor to receive the prestigious Institute Honors awarded by the American Institute of Architects (AIA), their highest award for a non-architect.

The sculpture was fabricated in Paley’s 50,000 sq. ft. studio in Rochester, N.Y., and took 10 full-time staff six months to complete.

The piece was loaded onto a flat-bed truck in three sections and in the height of Rochester’s snowy winter, headed south to sunny Florida where it was installed on top of the fire station, facing Commercial Boulevard.

“Through the creative process I have developed a personal visual vocabulary fundamentally based in symbolism and metaphor which is implicit in my work,” Paley reveals in his artist statement.

“What I’m trying to do is bring that aspect of culture to the community,” he says. “To give the community a sense of identity, ownership and a true piece of public art.”

“If it doesn’t engage the community, it’s not a success,” Paley said.