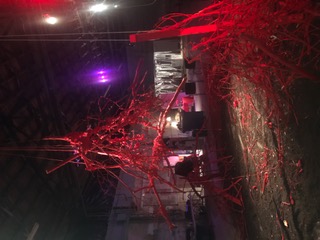 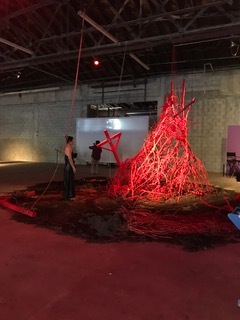 The Broward County art scene achieved new heights with its second annual The Nerve 2017 performance art festival. The festival spanned three days in March, concluding on a recent Sunday evening with a dramatic curtain close.
Crowds piled in to three main galleries to attend a unique event at the FATvillage (Flagler Arts and Technology) Arts District of Fort Lauderdale. More than 30 artists performed thought-provoking pieces through a collection of extraordinary modes of expression and interpretation leaving the audience stunned, especially one such performance by ground-breaking female artist, Belaxis Buil (www.belaxisbuil.net).

In this three-part interdisciplinary exhibit, Buil used various genres of art to challenge mainstream, minimalistic approaches to the art world.

Bloodthirsty (the end of the reformers, the beginning of change). Courtesy of Belaxis Buil 2017

View from the audience…

The performance begins with a beautiful woman wearing a leather slip standing with her back to the audience, in front of painted red sticks that look like arteries of a human heart. She is held captive by a thick rope attached to a brace embedded in her dark hair and attached to the high ceiling. An ominous man standing opposite begins using different weapons to hack through the arteries creating an edginess through the sound and sight.

On Sunday evening,  Belaxis Buil was performing the third act of her piece, with day three emphasizing gestural action and reinvention of sculpture. My first impression is of the two genders male and female in competition. As the entire exhibit is focused around St. Joan of Arc and Pagan-Wiccan practices, I sensed strongly the need for the woman to break free from the man, as with each loud chopping noise she became more agitated, as was the audience, and myself.
A knife appears and she takes action to this agitation by sawing through the rope, causing several audience members to squirm uncomfortably in their seats with the disturbing struggle she seemed to endure.

She finally manages to escape the rope and the perceived danger of the man. The audience waits with anticipation.

Surprisingly the woman does not run away or attack the man.

Instead she sits quietly and watches while he finishes his work, without imposing danger or threat, not before dramatically throwing the knife into the red sticks.

The performance ended when the man stopped chopping.

For myself, I felt I had witnessed a striking performance that commented on the debate of gender norms and how conditioned society is to feel that man is always a threat.
Also pertinent to me in this performance was the heart symbolized as the beat of life, a shared common humanity that exists in both genders and also, how we all have our own work to do.

I caught up with Belaxis Buil after her performance and she shared this:

“The works I have created seem to argue with old mentality art critics (such as Greenberg and Morris), who talk about illusionism and minimal art and that it should be instant, as opposed to theater and other works or styles requiring time to experience.”

In response to this I told her my take on the performance, and she became gratified that my experience “transcends the idea that art has to do just ONE thing for somebody. It’s supposed to do something for individual consciousness, which will be different for everyone.”
In accordance with celebrating unique experiences, Fort Lauderdale’s FATvillage seeks to represent challenging exhibits that force us to go deeper and this extraordinary artist allowed me to do just that.

For more information go to https://www.fatvillageprojects.com/the-nerve-2017 or visit me on twitter: ali@laquadivine.com 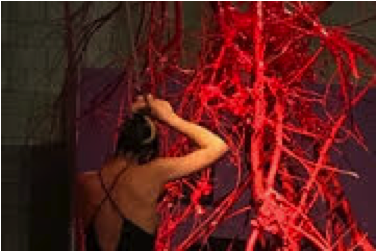