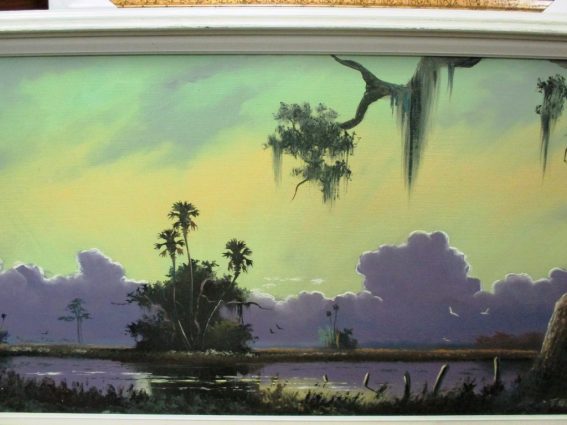 A group of eight original Florida Highwaymen drove down from Fort Pierce to Pompano Beach to sell their artworks on a recent Sunday in March …only this time they didn’t have to go door-to-door to sell their now-renowned paintings, as they did back in their early days. This weekend they were the featured artists and guests of honor at an art sale at the 1916 Sample-McDougald House in Pompano Beach.

All-in-all, there are 26 artists included in this group of ‘originals’ and in 2004 all 26 artists were inducted into the Florida Artists Hall of Fame. 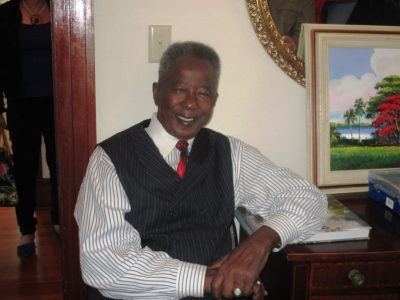 The group of African American artists began painting in the mid-fifties as an alternative to working in the Florida bean fields. They travelled the coast of Florida selling their bucolic landscapes of pre-developed Florida to local offices, businesses and restaurants.

Their paintings were a hit with native Floridians and the many transplanted northerners alike – serene images of the St. Lucie River, flowering royal Poinciana trees, romanticized landscapes of sun, sky and palm trees, wildlife, pink and white fluffy clouds and spectacular sunsets.
Wellington residents Steve and Eliane Sparks drove down for the show and were looking to add to their collection.

“We’ve purchased 12 paintings over the past year,” says Steve Sparks who chose another of Reagan’s vivid orange and pink sunsets.

“In addition to the paintings themselves, we really like their story,” he says about the group’s organic beginnings.

Local collector Steve Carr of Lake Worth, a retired fire firefighter paramedic, first stumbled across their paintings when he was called to a fire at the old Lake Osborne Hotel about 10 years ago. On the walls were a dozen paintings by Florida Highwaymen.

He was able to salvage a number of paintings from the fire and began seriously collecting them.

However, by the 1970 and 80s, the trend of the Florida Highwaymen had run its course, he says, until 2001 with the publication of Gary Monroe’s first book, The Highwaymen: Florida’s African-American Landscape Painters. 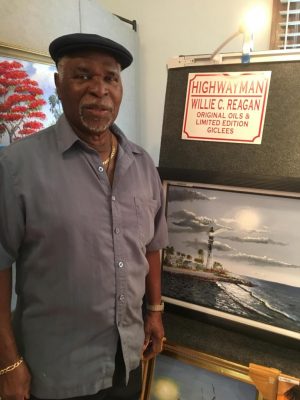 The works have become highly collectible and while the earlier paintings from the ‘50s-60s might be more highly-prized, Carr says many of the artists like James Gibson and R.L. Lewis are at the top of their game today. “They’ve become very seasoned artists over the years,” he says.

Cherryl McDougald, granddaughter of Sample-McDougald House’s original owners, grew up in the 17-room Colonial Revival home, provided background color to the exhibit on this day.

“It was the dream of my grandparents for our family home to become a city museum,” she says.

The home opened to the public in 2012 after more than a decade of restoration and was relocated from Sample Road and Dixie Highway in 2001 to its current location at 450 NE 10th Street in Pompano Beach.

Down the hall, R.L. Lewis was demonstrating his technique, putting the finishing touches on a painting with a palette knife and a splayed out paintbrush.

A grassroots movement, the group and their artworks had universal appeal and are often favorably compared to the Hudson River School of artists, a mid-19th century American art movement.  Many of the Florida Highwaymen studied under Fort Pierce landscape artist, A. E. “Beanie” Backus.

The salesman of the group, Al Black, (the subject of Monroe’s book The Highwaymen Murals: Al Black’s Concrete Dreams, now 71, became adept at painting after touching up the others’ works as he was transporting them for sale.

He remembers walking up and down the street selling his wares –  five paintings in each hand.  At that time, paintings sold for about $25 a piece.  Now, according to some sources, these original works of art can fetch $5,000 or more.

While he served time in the Florida State Prison System for fraud, Black now looks back nostalgically on those days in prison.

“Those were the best 12 years I ever had,” he said.  “I didn’t want to go home; I was living better in there than in the outside world.”

Known as ‘Inmate Black’ in the Central Florida Reception Center, under Gov. Jeb Bush (who Black says, believed he got a bum rap,) he was able to live in his own trailer, cook his meals and paint murals throughout the Florida penal system.

When he was released in 2006, he came out with $180,000 earned from paintings he sold on the outside and to prison staff.

He recently completed his latest mural at S.E. 6th St. and U.S. Federal Hwy. 1 in Ft. Lauderdale, just south of the tunnel on a soon-to-be museum dedicated to the Highwaymen and their work.

Black is also the subject of a film about the Highwaymen by Walter Shaw called “The Unknowns — Talent is Color Blind.”

As a result of a disagreement with the Pompano Historical Society, a co-sponsor of the event, along with the Sample-McDougald House, original Highwaywoman Mary Ann Carroll, 77, was installed in a booth across the street.

Recently recovered from brain surgery, Carroll, is still painting and photos of her alongside former First Lady Michelle Obama hang in her booth.  She recently returned from Canada where she was invited to meet with Prime Minister Justin Trudeau.

The work of the Florida Highwaymen stands the test of time and today can be found in The White House, The Smithsonian, the Florida Governor’s Mansion and in the new National Museum of African American History and Culture which opened last September in Washington, D.C.

Visit the A.E. Backus Museum in Fort Pierce to view the nation’s largest public exhibition of artwork by Florida’s preeminent painter, A.E. Backus. The Museum also offers the State’s only permanent multi-media exhibition on the Florida Highwaymen and is fresh from a multi-million dollar expansion, which doubled its size.