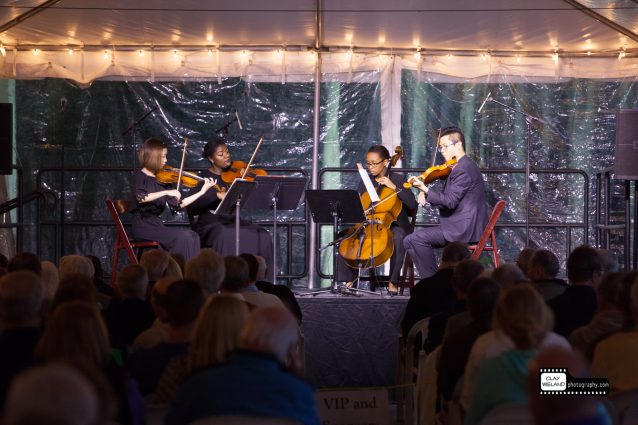 Bonnet House Museum & Gardens finished their popular “Concerts Under the Stars” series April 6 with the Dillard Jazz Ensemble. The public high school program in Fort Lauderdale that develops student performers into accomplished musicians presented an entirely new repertoire. The series shone the limelight on a variety of young talent performing opera to contemporary jazz in one of Fort Lauderdale’s darling historic venues.

The March performance by the talented Lynn University Vero String Quartet featured classical music of the 18th and 19th centuries. The setting and the music transported attendees back in time.

The fading light allowed guests to relax into the tranquil, lush setting while a golden glow gave the waterlily-filled canal alongside the festively-lit performance tent the feel of a tropical Monet landscape complete with a white swan. The music fit in with the slower pace one could imagine when the original owners occupied the Bonnet House. The whimsical white and yellow structure of this historic home contrasts with the green fauna. The final Presto movement had a danceable rhythm.

Now in its 21st year, the concert series features South Florida young talent January through April. Guests are encouraged to come early to enjoy the extraordinary landscaping, view an art exhibit and sip complimentary wine before the concert as dusk falls. Only a block away from Fort Lauderdale beach full of Spring Breakers determined to sport Bermudas and bikinis in the nippy dusk, the Bonnet House concert contrasted with one concert-goer sporting a fur stole.

Chicago-born artist Frederic Clay Bartlett built the house in 1920 on South Florida oceanfront land given to him and his second wife, Helen Louise Birch, by her father Hugh Taylor Birch, a prominent Chicago attorney, real estate investor and naturalist. For more than 70 years the Bartletts and Birches resided on, sustained and enhanced the 35 acres, their buildings, and decorative contents. Today the estate is a preeminent house museum dedicated to historic and environmental preservation.

The Vero Quartet’s second work was the Borodin String quartet, written in 1881.

“Borodin is life and love,” Barrett explained after the concert.

Included in a live classical performance is the experience of hearing the musicians breathe and move to the music, chair creaks and all. The Noctorno movement conveyed romance and made one concert-goer remember Mario Lanza’s interpretation of the waltz entitled ‘And This Is My Beloved’ made famous in the movie Kizmet.

The Quartet imbued the Adagio non lento movement of the Mendelssohn String Quartet no. 2 in A minor, Op. 13 composed in 1827, with a deep mournful feeling. Violinist Nguyen described the composition as very challenging and technical.

The smell of coffee wafted through the last movement. A frog’s vibrating call joined in for this final piece that Barrett said, was chosen for its tenderness, which made it special to the group.

“Such a beautiful setting,” commented concert-goer Elise Peters, a pianist who was scouting the property for her friend’s daughter’s upcoming wedding.

“As a quartet, we’re in love.” said Barrett of the group’s off campus debut.

The not-to-be-missed “Concerts Under the Stars” series begins again next winter.

Upcoming events at Bonnet House include classes on birding and plants, workshops on basket weaving and art, exhibitions and a cruise; visit bonnethouse.org for details.