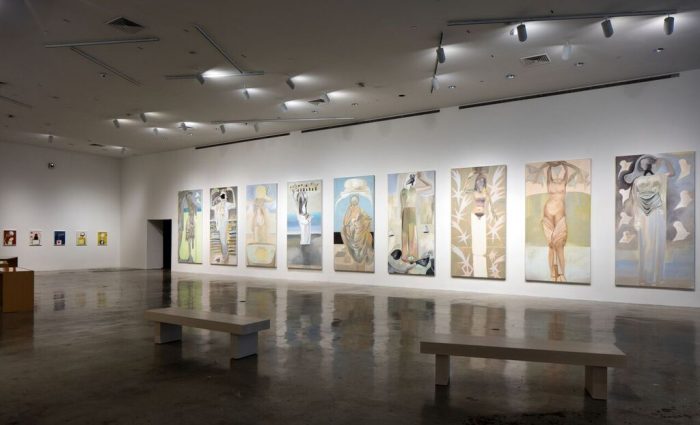 Today, when you walk into the high-ceilinged second floor exhibition space at NSU Art Museum Fort Lauderdale, you see nine tall panels -- oil paintings by Francesco Clemente, inspired by many things, including his interest in…

Today, when you walk into the high-ceilinged second floor exhibition space at NSU Art Museum Fort Lauderdale, you see nine tall panels — oil paintings by Francesco Clemente, inspired by many things, including his interest in Tarot cards.

The series, which Clemente created in 1998, is beautifully painted as Lynes points out, in washes and pale pastels with strong horizontals and verticals punctuated with black or rich blue.

Dormiveglia is a combination of the Italian words “dormire” (sleep) and “Svegliare” (waking up) and evokes the state between sleeping and waking, when colors are muted and you can experience strange and evocative forms, like dreams. Dreams, as Lynes reminds us, are non-linear, chaotic experiences that don’t make sense after waking up.

Looking at the paintings, I wondered why the women in them do not have faces. “As such they have instead a surrealist, dream-like quality and easily become an extension of our perceptions; they can be whatever we want them to be,” Lynes says. Faceless creatures in a state of dream and awakening have no ego at the stages of dormiveglia, a state of being when we experience a lack of ego, identity and consciousness. The women hint of revealing a sense of becoming, almost as if they could change, Lynes says.

The paintings are evocative of fresco painting and Clemente is very aware of grounding his work in these traditions. It was fresco narratives that taught people Bible stories in the medieval period and earlier (12th to 16th centuries) because most people in those days could not read. However the Dormiveglia paintings do the opposite, asking us to forget about the literary, and instead experience feeling.

When I first saw these paintings, before attending Lynes’ evening talk, what struck me about them was that they seemed to embody a conflict between expression (which is what an artist does) and suppression, the hiding of something (because the faces are not there). Lynes discusses the ambiguity of one of the panels, in which it is not clear whether we are looking at the front or the back of one of the women, who holds an arch form.

Clemente, who is 64, and lives and works in New York, Italy and India, credits his wife Alba, as a force and a female model to celebrate.

At an early age, Lynes tells us, Clemente had “a vivid, transformative perception of [his] own mortality.” Psychedelic drugs led him to question the power of the ego, and being an artist seemed a way for him to ask: “How do we know what we know? What is worth knowing?”

On a trip to India, when he was 23, he discovered “Anatma,” (no self) — the self without the ego. That suggested to him that what we think of as our human identity is but a hollow mask, that each of us has a public and a private self, and that no one knows anyone completely.

In addition to the large paintings, which measure 10.8 x 5.3 ft. each, the exhibit includes small watercolors of 2  x 1.5 ft., and Clemente’s 2008 series of delightful, small works that celebrate the joys of 21 kinds of love. These 6 x 4 in. works are displayed in three glass-covered display cases.

When you visit the museum to see Dormiveglia, don’t miss the powerful Anselm Kiefer exhibit on the main floor on view through Sept 10!

Clemente and Kiefer both revitalized painting by re-introducing figuration, narrative, sensual color, and the gestural application of paint.