In 2009 artist Michele Oka Doner created an exquisite 3,000-square foot bronze and terrazzo floor for Terminal 18 at Port Everglades. Six years later she designed an entire wardrobe of fanciful costumes for the…

In 2009 artist Michele Oka Doner created an exquisite 3,000-square foot bronze and terrazzo floor for Terminal 18 at Port Everglades. Six years later she designed an entire wardrobe of fanciful costumes for the Miami City Ballet. Little did she know those two separate creative outlets would unite to generate, thanks to Broward County Cultural Division’s Counterpoints Project.

The Port Everglades terminal location chosen to spotlight Oka Doner’s tile floor design entitled Forces of Nature: Trade Winds and Ocean Currents is described by the artist as “a well-traveled work of art integrated into the building itself.”

The piece uses intersecting blue and green terrazzo embedded with broken pieces of seashell and mother-of-pearl to represent the water. The composition includes two areas of focus. In the wider section, an 8-foot-diameter bronze globe is depicted spinning, while the narrower portion features 200 bronze units with actual seeds embedded to form seedbeds drifting in the ocean. Assistant Port Director Peg Buchan, who attended the photo session, declared it to be “glorious to see.”

In keeping with the artwork’s water theme, eight young Miami City Ballet School dancers, ranging in age from nine to 13, donned the sea creature costumes Oka Doner had designed for last year’s performance of A Midsummer Night’s Dream. Though that ballet is traditionally set in a forest, the new production was re-imagined with an underwater setting. Oka Doner had been commissioned to craft the ocean-inspired costumes. Before designing her garments, she studied marine biology specimens, inspiring her to incorporate features such as flowing tentacles and pointy scales into the designs.

At the suggestion of photographer Tabatha Mudra, the girls pranced and pirouetted for the camera, gracefully undulating like animals beneath the sea brought to life by the multiple talents of one local artist. 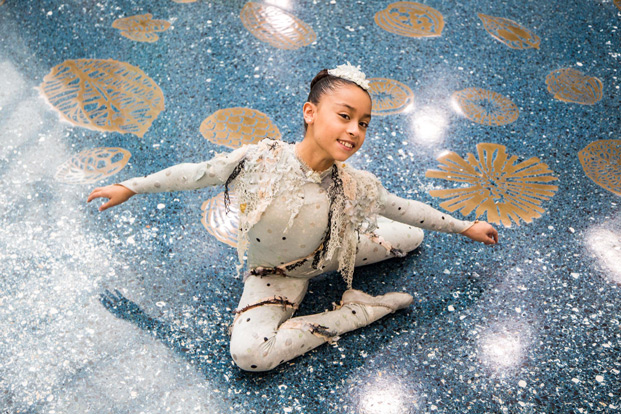 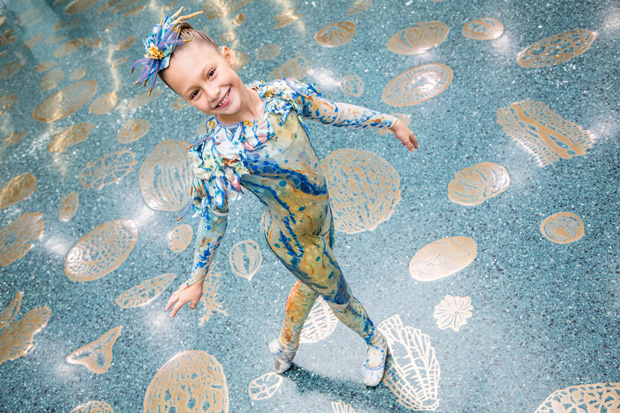