Competition is the fuel of Capitalism, the theory being, at least partly, that it encourages people to excel. However in the arts, individual artists may tend to want to better themselves rather than to compete with others. That being…

Competition is the fuel of Capitalism, the theory being, at least partly, that it encourages people to excel. However in the arts, individual artists may tend to want to better themselves rather than to compete with others. That being the case, in a unique twist, art events that feature live competitions have become more popular lately. 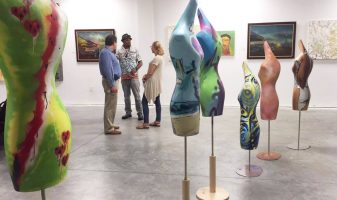 You’ve heard of poetry slams? Now there is Magnetic Pompano’s Creative Clash (CC). Each CC features six or seven artists competing with each other live, in front of an audience. The clashes take place the fourth Friday of each month at the Pompano City Center Mall and are nothing if not lively! The July competition involved artists spray-painting canvases measuring four by five feet, and the August event involved artists spray-painting onto mannequins as their canvases.

Marvel, a 36-year-old Fort Lauderdale resident, was one of the two winning artists in the August Creative Clash (in a tie with “Todd the Painter”). She says the first time she was in a Creative Clash, it was nerve-wracking. As she relates the experience, once the painters are introduced, the deejay starts playing music, the painting begins, and the audience reacts.

“You want to please the audience,” Marvel said. “I might paint a little section, and when I reveal it, they clap, or I hear their commentary.” Audience members also take pictures and shoot videos. Marvel said she wants to do her absolute best when she is in front of the audience.

Since participating in Creative Clash, she says working alone in her studio pales by comparison, “I feel like every time that I’m painting alone in a studio, it’s now practice for painting live, which is the real deal.” Although painting for a live audience in a contest is “a lot more pressure,” she says, that helps the painting itself. “There are no fix-ups. Whatever I show is what they get.” Marvel says that her day job, in which she is a tattoo artist, helps her painting, and likewise, painting in the Creative Clash events helps her day job, because in both modes, there is no erasing, “no going back.” Asked how she approaches the Creative Clash live painting events, she said that as an artist working with spray paint, “I kind of do what I would do on a wall.”

The mannequins were provided to Creative Clash by Macy’s, the program’s sponsor, and all of the artist-painted mannequins from the August CC are on display in Macy’s, which carved out a gallery for them. It’s indeed another clever idea to bring art into a department store, a way of bringing the museum to the public. “Once the exhibit is over, the artwork will be up for auction at Pompano City Center,” says Jody Leshinsky, Vice President of Administration of Cultural Arts Creatives. 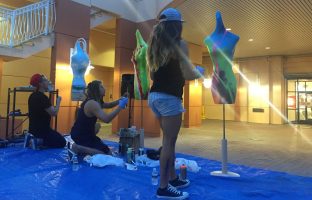 Creative Clash will vary the type of art from month to month. Thus, October’s CC will be among gospel choirs, and December’s CC will feature dancers in various genres, such as hip hop versus contemporary. Among Magnetic Art’s other programs, there is a spoken word poetry event on the first Friday of each month, called Cuisine and Poetry. Eccentrich is its resident poet and she invites audience members to get up on stage and speak.

The second Friday of each month features the Midtown Gospel Cafe, dubbed “a Sunday morning experience on a Friday night.” Non-secular, fun and energetic, it features music, comedy, and dance. Leshinsky says that the last one was standing room only, in a room that can hold around 115 people.

On the fourth Friday of the month, in addition to the Creative Clash outside, there is an opening reception for an art exhibit in the gallery. The more recent exhibit featured work by Julio Green, Pascal Lacoc, Bonnie Shapiro, Serge, and Mi Yap. Byron Swart is the curator, and he also programs the Magnetic Space. Painter Marvel marvels that Byron “always makes it a great event!”

Cultural Arts Creatives’ mission is “to enhance Pompano Beach as the city of culture and innovation, by showcasing acclaimed regional talent, empowering emerging artists, and creating global collaborations.” And it certainly seems to be doing that!