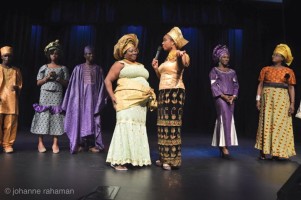 Hosted by the African-American Research Library & Cultural Center on Saturday, August 29, it celebrated African attire, arts and crafts, and literature. Created to share history and culture, and to bring the African Diaspora…

Hosted by the African-American Research Library & Cultural Center on Saturday, August 29, it celebrated African attire, arts and crafts, and literature. Created to share history and culture, and to bring the African Diaspora together with the African American community, the festival showcased African styles in a fabulous fashion show whose models included children, women, and men.

The Festival’s creative director, Jaury Jean-Enard, handsome in an embroidered brown linen ensemble and Gele hat designed for him by Patricia Hollande, said “African fashion is growing worldwide and South Florida’s vibrant culture is a great place to stage this growth.”

Attendees arrived dressed in African finery for a program featuring a ‘meet and greet’ with artist/performer/designer Prince Emmanuel Aderele from the royal lineage of HRM Oba (King) Rufus, and a special screening of the documentary “Africa Straight Up.” The program included a panel discussion with Derrick N. Ashong, an award-winning musician and the founder and CEO of the music sharing social network amp.it; fashion model Vernet Pegues, vice president of CatWalk Pros; author and scholar Dr. Yinka Tella, president of the Nigerian American Foundation of South Florida; and Dr. Agbeko-Kwasi Tosu, an international consultant and educator.

The audience was invited to network among vendors of native African food, clothing, arts and crafts, and literature, following the fashion show and some comments by designer Hollande. Originally from Benin City, Nigeria (a few hours from Lagos), she came to the U.S. to major in biology at what is now St. Thomas University. Finding that she enjoyed business, she opened Patty’s Place, a store in Miami carrying clothing imported from Africa, movies, bags, and shoes.

Little by little, Hollande began creating her own one-of-a-kind fashions from Nigerian fabrics, inspired by her customer’s requests. Nigeria is known for being fashion forward, she told me, with new styles and fabrics coming to market every week. She likes using a variety of fabrics — lace and French lace, organza, ankara (bold, colorful cotton prints that can be worn casually or dressed up for elegant occasions), “tie and dye,” and a fabric known as George, which she said can be plain or have designs on it.

Hollande enjoys designing clothing for all sizes, from small through 3 or 4x, and her creations range from children’s outfits that match their parents’, to women’s and men’s fashions. The Hollywood, Florida resident has plans to expand her business by opening more stores. Asked if there are any American designers she likes, Hollande said Michael Kors. He does some prints that look like African ones, she said, and he cuts some of his clothes to resemble African styles, such as the buba, a large loose dress similar to a muumuu.