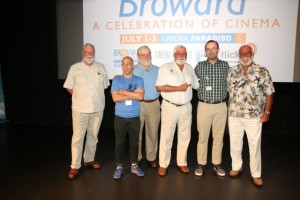 Did you happen to notice the unusually high percentage of middle-aged men with white beards at Fort Lauderdale’s Cinema Paradiso on Friday night? This was no coincidence—opening night of Filmed in Broward: Take 2!,…

Did you happen to notice the unusually high percentage of middle-aged men with white beards at Fort Lauderdale’s Cinema Paradiso on Friday night? This was no coincidence—opening night of Filmed in Broward: Take 2!, a film festival celebrating home-grown filmmakers, headlined PAPA, a documentary about the annual Ernest “Papa” Hemingway Look-Alike Contest in Key West.

The 3-day film festival featured 14 films made by Broward filmmakers—shorts, documentaries, dramatic features and comedies—and was co-sponsored by the Broward Cultural Division. Following last year’s debut festival which focused on studio films shot in Broward, this year’s version focused on the area’s independent films and its local filmmakers, and was, in fact, even more well-attended than last year. All screenings were free and open to the public, a great opportunity to catch up with what local filmmakers are doing.

PAPA chronicles the 2012 contest, in which portly, white-haired men sporting white shirts and red berets vie to win the contest through preliminary and final rounds at Sloppy Joe’s while also enjoying camaraderie and good times with each other. The film also focuses on some of the men who return to Key West every year, through interviews with contestants who live as far away as Rockport, Massachusetts.

One of the storylines follows contestant Denis Golden, an audience favorite, who sings old-timey songs and remains charming and upbeat despite a stroke he suffered since the last contest. Another storyline follows the antics of 2011 winner Matt Gineo.

PAPA was written and directed by Shane Christian Eason, a film production professor at Florida Atlantic University in Davie who is active in the local indie film community. He curates a number of annual events in the Fort Lauderdale-Miami area including 1:1 Super 8 Cinema Soirée, established in 2006, and the Flamingo Film Festival, established in 2012. He is currently organizing an international conference and festival for experimental and documentary film.

Following the screening of “Papa,” Eason and Matt Perez, who co-wrote the film, and four former Papa contestants—including one of the stars of PAPA Matt Gineo—were on-hand to answer questions.

At a Key West-themed after party, crab cakes and tiny key lime cupcakes filled paper plates while the Hemingway look-alikes rubbed elbows with Fort Lauderdale film types. The eclectic mix of Key West, indie film, and bearded men in safari shirts could probably only be found at Cinema Paradiso, which gives independent voices a venue and audiences the opportunity to experience them.