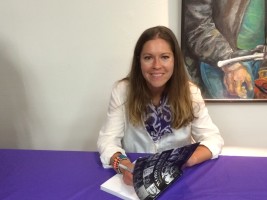 What does it take to be a successful artist? Passion, determination and a business plan, author Lily Clayton Hansen told a gathering of artists, arts-based business owners and creative entrepreneurs recently at the closing forum…

What does it take to be a successful artist? Passion, determination and a business plan, author Lily Clayton Hansen told a gathering of artists, arts-based business owners and creative entrepreneurs recently at the closing forum of the Broward Cultural Division’s “DBA Doing business as…,” an artist entrepreneur art exhibition at artserve in Fort Lauderdale.
Hansen is the author of “Word of Mouth: Nashville Conversations: Insight into the Drive, Passion, and Innovation of Music City’s Creative Entrepreneurs.” The coffee table book is a collection of interviews and black & white portraits of many of the artists, musicians and chefs behind the city’s boom.
Her presentation was a down-to-earth, revealing look inside her creative soul—the three years of determination and hard work (more than 100 interviews) behind the book, and the life experiences that led her to a career as an interviewer and storyteller, journalist and author.
“My whole life, people kind of opened up to me,” Hansen said. “I was always a listener.”
While studying English in college, Hansen discovered magazine journalism and learned how to write during an internship at a Chicago entertainment magazine.
At 24, she did an internship at Chicago’s top fashion magazine. “I did whatever. I was like a sponge,” Hansen said. “I became sort of a business artist, a hustler.”
Then, at 25 and “with no sense of direction,” Hansen moved to Nashville where she worked as a bartender and freelance writer. An interview with country music star Carrie Underwood “kind of launched my career,” Hansen said, explaining that the resulting story created a niche for her as a celebrity writer.
But those early days in Nashville also were a time of “tremendous frustration and sadness,” Hansen said, citing two breakups with boyfriends. Then she got the idea for “Word of Mouth: Nashville Connections.” “I had a real vision,” Hansen said. “Everything kind of lined up in my head.”
She asked an ex-boyfriend to shoot the first portrait photos. “The next lesson: don’t burn bridges,” Hansen said. “It was a strategic move, artistically and business-wise.” Three other photographers later got involved in the project. Soon she had 35 portraits and interviews.
A friend created a 20-page mockup of a book. “Until this point, it felt like a game,” Hansen said. “It wasn’t just me anymore. It was a community project.”
A series of ups and downs followed. A turning point occurred after Hansen took a six-week series of business classes for artists at the Nashville Entrepreneur Center. She said she cried when she realized, “Oh my God, I don’t know anything about business.” The classes, she added, opened a door that she didn’t know existed. Hansen learned how to develop business and marketing plans and to “think about your buyer.”
She compared the Nashville program, Periscope, to the Broward Cultural Division’s Artist as an Entrepreneur Institute. Periscope is “a business organization that focuses on the arts,” she said. The Institute program is “an artist organization that focuses on business.”
Hansen signed a contract with a publishing house about five months after completing the Nashville program.
After turning in the manuscript, she took a week off and then began marketing the book by networking in the Nashville community. “It works, so sell what you’re doing with passion,” Hansen advised.
In an interview before the Fort Lauderdale presentation, Hansen said the first time she thought about business or business as “an art form” was when she took the classes at the Nashville Entrepreneur Center. It was like a shaken bottle of champagne and spraying its contents, she said. “A whole world of new opportunities kind of exploded for me.
“I feel very lucky. I just hit upon something,” Hansen said. She was in the right place and in a digital time when “people were craving face to face conversation; people were wanting to know their neighbors’ conversations,” she said.
Hansen is planning to write a similar book about creative people in Chicago. A book about artists in Fort Lauderdale “would be great,” she said.
“Word of Mouth: Nashville Conversations” is available at Barnes & Noble stores or BN.com, Amazon.com and from publisher Spring House Press at springhousepress.com.
Visit wordofmouthconversations.com to learn more about the book and to subscribe to Hansen’s blog.