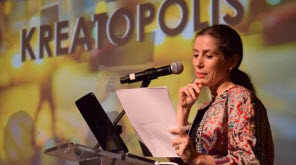 Symposium Informative To Students and Experts

The Broward County Cultural Division event A Creative and Cultural Industries Symposium: The Future of the Latin American, Caribbean, & South Florida Economies held in May at Broward College started out with big picture experts…

The Broward County Cultural Division event A Creative and Cultural Industries Symposium: The Future of the Latin American, Caribbean, & South Florida Economies held in May at Broward College started out with big picture experts and cultural leaders from Latin American and Caribbean countries.

The first speaker Trinidad Zaldivar, Chief Cultural Solidarity and Creative Affairs Division with the Office of External Relations at the Inter-American Development Bank dove into the theme of the event “The Orange Economy: An Infinite Opportunity” listing statistics, successes and challenges in the region, bringing up examples of Kreatopolis creative cities and the “mindfactures” concept. Her talk explained the IDB’s commitment to funding and promoting cultural industries and producers, and underscored why an inter-development bank has taken such an interest in the Creative Industries

Anahí Moyano Larrea, an advisor to Costa Rica’s Ministry of Culture and Youth elaborated on her country’s efforts to develop a new concept of cultural satellite accounts.

Trinidad native Marielle Barrow, Editor-in-Chief of Caribbean InTransit spoke about her multi-national efforts and the implications of the IDB Orange Economy Report in the context of the Caribbean arts and culture economy. Barrow noted the surge of biennials in the Caribbean and the need for a regional investment policy in the arts.

“We are a cultural superpower!” Grange declared. “Our intangible asset is pregnant with opportunities.”

While the creative society is well loved, Grange said that is not enough as Jamaican artists are not getting a significant share of the wealth generated by their art and therefore it is important to protect intellectual property. While certain UNESCO designations help, Grange said, Jamaica is implementing institutional support and structure for artists.

The morning session of experts was rounded out by Ana Carla Fonseca Reis, who connected electronically from Brazil where she is a founding partner of Garimpo de Soluções, a pioneering company devoted to the convergence of culture, economics and development.

The Symposium was a stop on a study tour for a group of Masters students in the Janklow Arts Leadership Program at Syracuse University.

As the group of 13 students listened to morning presentations, many were exposed to the varied cultures of the region for the first time. Nearly half of the students in the group are from China.

Chinese students Frank Chen and others had already visited numerous cultural institutions in South Florida. Chen was struck by the racial and cultural diversity of the Caribbean and Latin American countries and how that showed at the conference and South Florida.

His perspective on access to cultural events was informed as a foreigner. His capstone project aims to aid Chinese travelers who find the public transportation options in the U.S. limited, and therefore hinders their mobility to travel and see cultural attractions.

Syracuse native and fellow student Melissa Bassett said she was enjoying the conference as someone who was studying international relations and cultural industries with particular focus on immigration, displacement and refugees.

“I hope students take away that cultural leadership is really about understanding how culture connects to the civic agenda,” said Professor Mark Nerenhausen, director of the Syracuse program and former CEO of the Broward Center for the Performing Arts.

With afternoon breakout sessions and expert speakers, the NEA Art Works grant funded event ended with a focus on Cuba, bringing the day into a topical light, and looking ahead to the future with Broward Cultural Division hoping to lead the way as a central location and instigator for future Latin American, Caribbean and South Florida regional and economic talks and meetings.